Tanak hit the front on stage three when Hyundai driver Dani Sordo was slowed with fuel related issues, and didn't look back as others suffered minor woes.

The Estonian finished the leg with the third fastest time on the Lousada superspecial, and was happy with his performance after what he described as a "critical" day.

Latvala squared off against Tanak in his stage seven heat, but dropped another 2.1s around the short test to lose further ground.

Kris Meeke ensured it remained a Toyota 1-2-3 with third place overnight. The Northern Irishman lost time in the morning when the intercom between him and co-driver Sebastian Marshall failed.

Meeke is within touching distance of his Toyota team-mate Latvala, with just 5.5s splitting the pair.

Thierry Neuville eked out a further 0.9s over Sebastien Ogier on Lousada to lie fourth, holding a 1.6s advantage over his title rival after a slow start.

The Hyundai driver beat Meeke in their heat around the rallycross track to trim the third placed Toyota's advantage to a mere 1.4s heading into Saturday.

Ogier did "everything he could" in his Citroen C3 to conclude the day in fifth, claiming he would have "signed for this position with both hands" given his role as road sweeper in the morning. Ogier is just 3s shy of third placed Meeke.

Teemu Suninen ended Friday sixth overall, threatening to take second from Latvala on stage six only for the brakes to fail aboard his M-Sport Ford Fiesta.

The Finn lost more time on Lousada, as with no service between stages six and seven he had to contest the superspecial with limited braking.

M-Sport's Gus Greensmith completed his first day in a World Rally Car in seventh overall; his only issue being the Ford not selecting stage mode on stage five.

Esapekka Lappi ended Friday within just 1.6s of Greensmith after beating him by 2.3s in their heat around Lousada.

Lappi had briefly been over 50s behind, but received a nominal time for stage five after being caught in the dust behind an ailing Elfyn Evans.

Evans had been running in the top five, but suffered an issue with his throttle and had to stop to fix it, losing four minutes and dropping out of the points scoring positions. 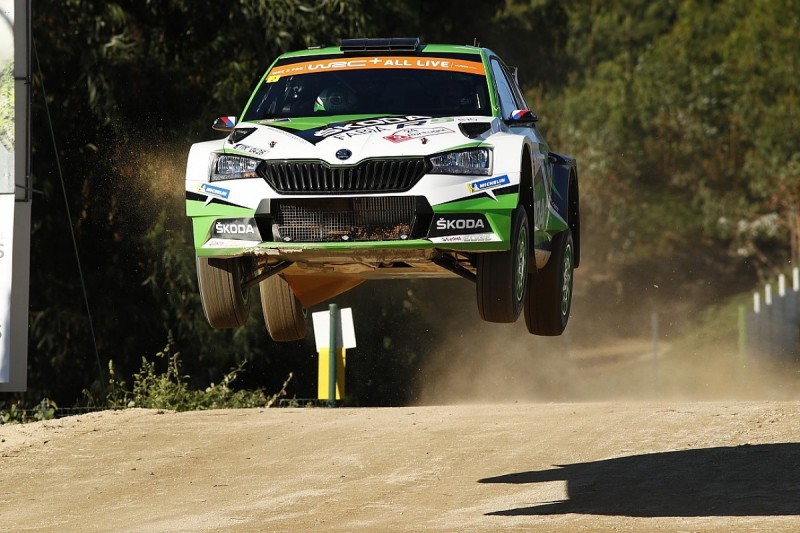 Sebastien Loeb and Sordo concluded Friday outside the top 20, with Loeb suffering a similar issue to team-mate Sordo on stage three.

Sordo had a day full of drama, with a puncture on stage six and then a bizarre incident at the start of Lousada where his door was still open when he was meant to leave the start line.