The event featured 11 changes of lead and until Saturday afternoon no one managed to extend an advantage beyond 4.5 seconds out front, despite heavy rain making conditions extremely challenging on Friday in particular.

What began as a four-car battle eventually distilled down to Neuville's Hyundai versus Ott Tanak's M-Sport Ford, after Sebastien Ogier first dropped back as he struggled more with running first on the road then picked up damage from punctures and Jari-Matti Latvala's Toyota - a long-time leader - had a clutch failure.

The Saturday afternoon stage on which Latvala dropped out proved particularly chaotic, with Neuville slowed by a puncture and Tanak's rear wing falling off.

Consequently while Tanak found himself with the largest lead of anyone so far at 14s, he had no chance of holding onto that cushion with three stages to tackle with a huge downforce deficit.

Neuville was therefore soon back in the lead, only to lose it again when Tanak won Sunday's wet opener.

But Tanak's chance of a second straight WRC win ended on the next stage, when he clipped a bank and spun, damaging his Ford too much to continue given the lack of service on the final morning. 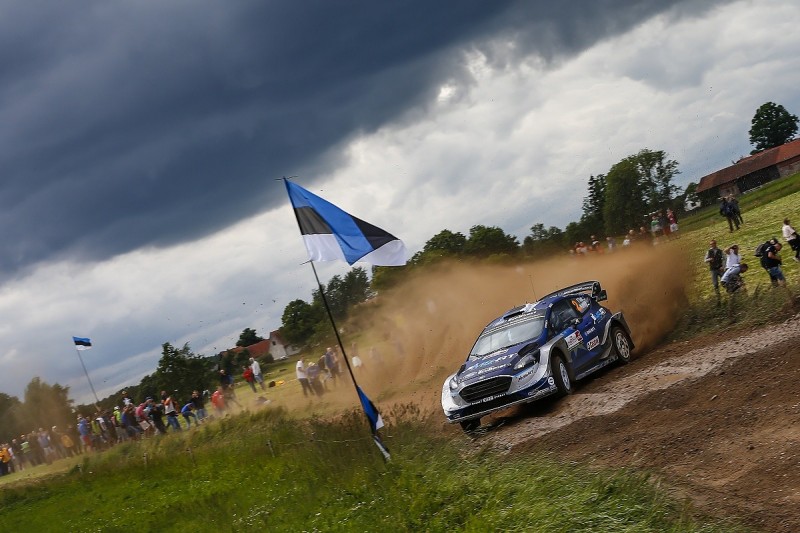 It marked the second straight year of late heartbreak in Poland for Tanak, who had come close to winning for DMACK there last season before a penultimate-stage puncture.

His exit allowed Neuville to cruise to the finish with a one-minute cushion over Hayden Paddon in a Hyundai one-two.

After a conservative start, Paddon surged forward with three stage wins on Saturday and secured his first podium finish in 12 months.

Ogier fell as low as sixth with his Saturday morning incidents but soon overcame Dani Sordo and then benefited from Tanak and Latvala's retirements to salvage a podium ahead of Sordo.

He then minimised damage to his championship lead by taking second on the powerstage, where Neuville was only fifth, meaning there was only a seven-point swing rather than the 10+ that had seemed likely.

Had Neuville been just 1.6s faster on the powerstage he'd have beaten Ogier to second place on it rather than only picked up a solitary bonus point for fifth.

M-Sport's WRC2 regular Teemu Suninen starred on his World Rally Car debut with a stage win on Friday and what should have been fifth place until a powerstage spin left him kicking himself and down to sixth behind Stephane Lefebvre.

On a largely terrible weekend for Citroen, which had benched Kris Meeke - who started 2017 as its title hope - for this rally, Lefebvre's very strong drive to fifth provided some cheer.

Meeke's replacement Andreas Mikkelsen had to work hard just to reach ninth having hit a tree stump on Friday morning then had various misadventures while recovering.

Citroen did make progress with its set-up from a terrible Friday in the wet - when Craig Breen, already way down the order due to an early driveshaft problem, said he was constantly "petrified" of crashing - to show better pace in the dry. Breen eventually finished 11th.

DMACK could not replicate its near-win of 2016, its tyre struggling on the wettest stages.

But it worked perfectly on the Mikolajki Arena superspecial, where Elfyn Evans was fastest on all three evenings it was run.

Evans finished eighth overall behind Mads Ostberg, holding off a closing Mikkelsen by 4.4s at the end.

Esapekka Lappi starred again for Toyota with an early fifth place, unable to match the lead pack but comfortably clear of everyone else, but then damaged his suspension on Friday afternoon and retired.

An array of technical problems meant Juho Hanninen could only manage 10th in the remaining Toyota, losing a place to Mikkelsen on the very last stage - where Latvala showed what might have been by taking the powerstage win.