Toyota's Kris Meeke moved into the lead of Rally Argentina with an early stage win, although World Rally Championship points' leader Thierry Neuville is beginning to close in for Hyundai

But a relatively poor time on Santa Rosa - San Augustin by Tanak, in which he was 10.2s slower than stage winner Neuville, dropped him down to second place.

That became third shortly after as Neuville and Citroen's Sebastien Ogier matched for the equal second-fastest time on the Parque Tematico superspecial, with Ogier tying with Tanak for the final podium position overall.

Times were generally inconsistent throughout the morning due to heavy rain in the days leading up to the rally, with Meeke suggesting he was a "passenger" during his stage win on SS2.

Neuville's pair of stage wins puts him 5.4s adrift of the lead despite struggling as first car on the road for the day-opening Las Bajadas - Villa del Dique test, in which he dropped 14.1s relative to Meeke to go only ninth fastest. 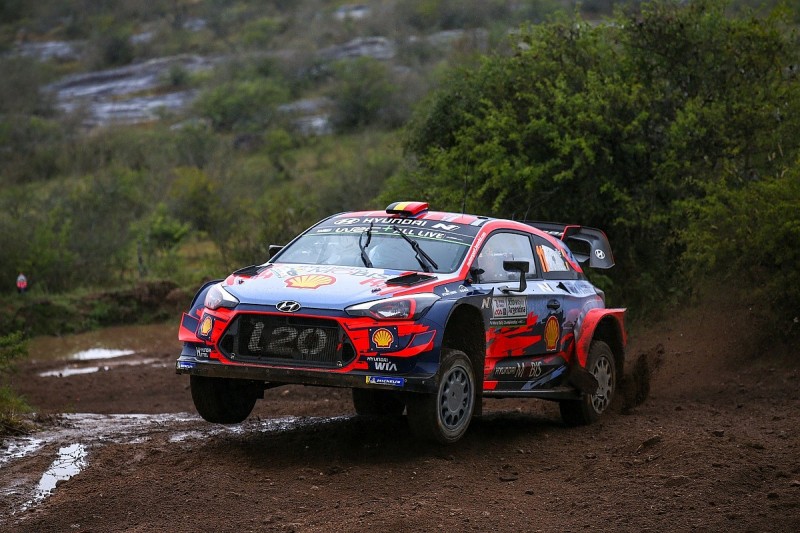 Despite only setting a single top five stage time this morning Jari-Matti Latvala is fifth overall, 8.8s off the lead in his 200th WRC start.

Andreas Mikkelsen, who won the Parque Tematico superspecial by 1.8s from Neuville and Ogier, is 11.7s off the lead in sixth.

He had been forced to drive conservatively on Santa Rosa - San Augustin when he picked up a puncture around three miles in, costing him 16.7s relative to rally leader Meeke.

The morning loop had been shortened due to the cancellation of the longest stage of the loop, Amboy-Yacanto.

Heavy rain in the day leading up to the rally damaged the liaison section approaching and exiting the Amboy-Yacanto stage.

However, organisers have confirmed it will run this afternoon, though spectators have been banned from entering the stage.