Meeke's stint at the front ended on Amboy - Yacanto, which was being run for the first time after its cancellation on the morning loop, as he dropped nearly 20 seconds to rivals earlier in the start order on the damp roads and fell to fourth place.

Tanak moved back into the lead with a second consecutive stage win but was then losing time to Neuville on the second pass of Santa Rosa - San Agustin even before spinning only a few corners from the finish line.

He pointed to a broken driveshaft as the cause of his rotation. 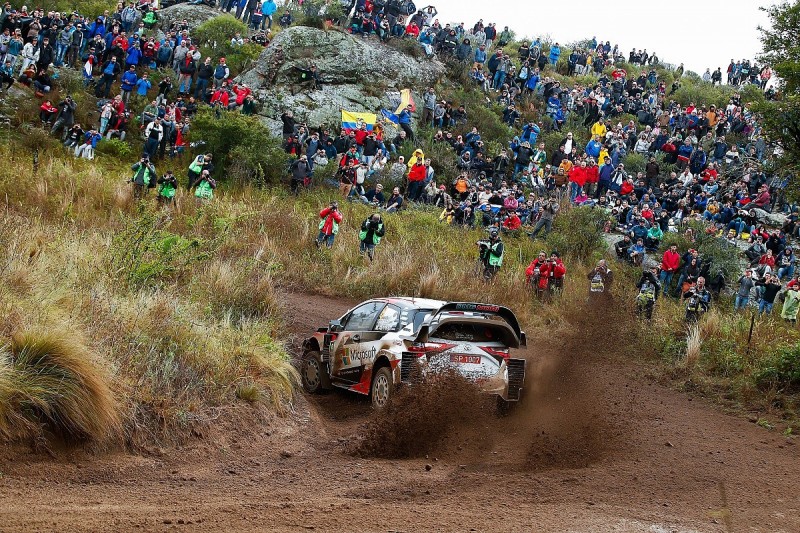 That incident cost him 24.8s relative to Neuville, which dropped Tanak 13.4s off the rally lead and down to third - 1.5s behind new second place man Sebastien Ogier's Citroen.

Behind fourth-placed Meeke, who is now 28.1s adrift of Neuville up front, i20 WRC pair Andreas Mikkelsen and Dani Sordo were locked in a close battle for fifth throughout Friday afternoon.

Both Mikkelsen and Sordo leapt ahead of Jari-Matti Latvala to take fifth and sixth respectively when the third Toyota was slowed by a right-rear puncture.

Sordo then grabbed fifth on SS7 but a poor time on Santa Rosa - San Agustin demoted him back to seventh, usurped by both Mikkelsen and Elfyn Evans in the lead M-Sport Ford Fiesta WRC - who moved into sixth place.

Latvala's position remains unclear after a marshalling mix-up, instigated by an accident for Esapekka Lappi - whose heavily damaged Citroen C3 could not be moved off-road.

A red flag was waved from the side of the road for Latvala but no subsequent drivers, leading the Toyota to finish the stage at a reduced speed while those behind went through unaffected.

Latvala's time was 1m42.6s slower than Neuville's stage-winning benchmark, dropping him to ninth behind Teemu Suninen. But some of that time loss was also down to a spin after hitting a bank.

A nominal time is likely to be sought by Latvala's Toyota team given the mix-up, which would potentially promote him back up the order by at least one position.

With Lappi crashing out, Citroen's WRC2 Pro entry is now 10th overall with Mads Ostberg at the wheel.