Tyres were the major talking point of the day, with Pirelli replacing Michelin as the WRC's new control supplier.

A shortage of pre-event testing in the truncated close season caused many teams to run conservatively; all the more so as no shakedown was permitted under the tight enforcement of measures to prevent the spread of COVID-19 in the Haute Alps prefecture.

It is understood that the Italian rubber has less grip in wet and snowy conditions, but this escalates considerably whenever the road dries.

Wet roads fringed with snow were far from optimum, therefore, but Tanak is a man on a mission to reclaim the title and wanted to capitalise on any hesitancy among his rivals.

At the start of his second season in Hyundai's i20 WRC, Tanak felt considerably more at ease than at this time in 2020.

Keeping closest to Tanak's pace was Toyota's young Finnish star Kalle Rovanpera, who sits five seconds in front of his British team-mate Elfyn Evans as the crews go into their first overnight halt.

Reigning champion Sebastien Ogier suffered a serious accident in pre-event testing which limited his experience of the new rubber and his performance was further blunted by an unnerving intermittent brake problem.

Ogier holds fifth place overnight behind the Hyundai of Thierry Neuville, who is joined for the first time by a new co-driver Martin Wydaeghe - who was only recruited last week after salary negotiations broke down with Neuville's long-standing partner Nicolas Gilsoul.

One man who missed the 'cautious approach' memo was M-Sport's Teemu Suninen, whose Ford Fiesta WRC was right on the pace of Tanak in the first two sectors of the opening stage.

The Finn then got caught out by a 90-degree right-hander, understeering into an earth bank and being pitched into a roll which ended up in the trees halfway down a hillside.

With a broken roll cage resulting from his off, the unhappy Finn will not restart. 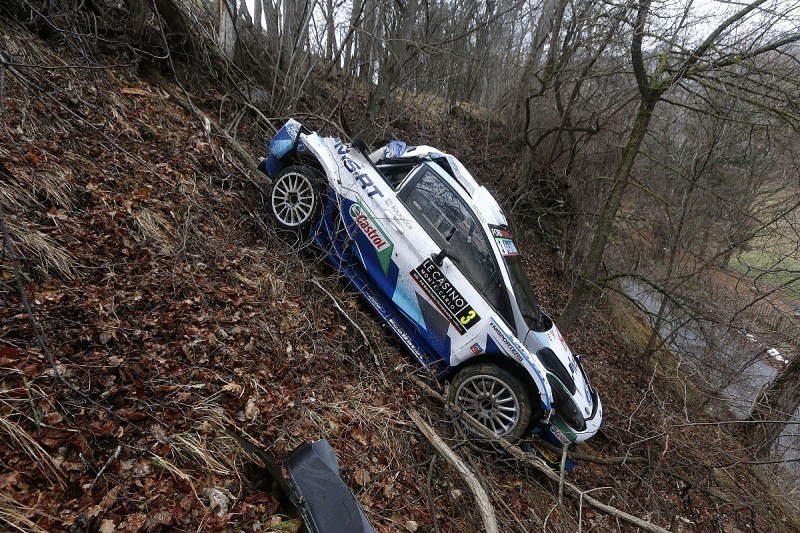 Some measure of cheer was brought to the Cumbrian squad by the performance of its French prodigy Adrien Fourmaux in the team's WRC2 entry.

The youngster's time hoisted him to second in WRC2 behind the Skoda of former WRC star Andreas Mikkelsen, who spent 2020 developing this year's Pirelli compounds and wants to use the second-tier category as a springboard back into the big league.

Russian driver Nikolay Gryazin holds third place in WRC2 at the wheel of his privateer VW Polo, just ahead of the man who took his seat for 2021 at Hyundai, Oliver Solberg.

In WRC3, Citroen ended the day with a 1-2-3 lockout for its French drivers Yohan Rossel, Nicolas Ciamin and Yoann Bonato.

Curfew regulations as a precaution against the spread of COVID-19 must be strictly adhered to, requiring an early finish to each day and precipitating a very early start to the second day's action, with the first stage getting underway at 6:10am local time.