Ott Tanak has extended his lead in the Arctic Rally, round 2 of the World Rally Championship, after claiming two wins out of the three stages on the morning loop

The Estonian, driving Hyundai's i20 WRC car, now holds a 23.6-second advantage over the Toyota of Kalle Rovanpera, who has passed the Hyundai of Craig Breen for second place overall.

Britain's Elfyn Evans, lying fifth, won the second stage of the day in his Toyota to keep the pressure on the fourth place Hyundai of Thierry Neuville.

Teenage Swedish driver Oliver Solberg holds sixth place in his first-ever appearance at the wheel of a full WRC car, driving a 2020-spec Hyundai and keeping in front of the 2021-spec Toyotas of Takamoto Katsuta and defending champion Sebastien Ogier.

The M-Sport Ford Fiestas of Teemu Suninen and Gus Greensmith complete the top 10.

"In the end a good morning, yes, but very, very demanding," Tanak said. 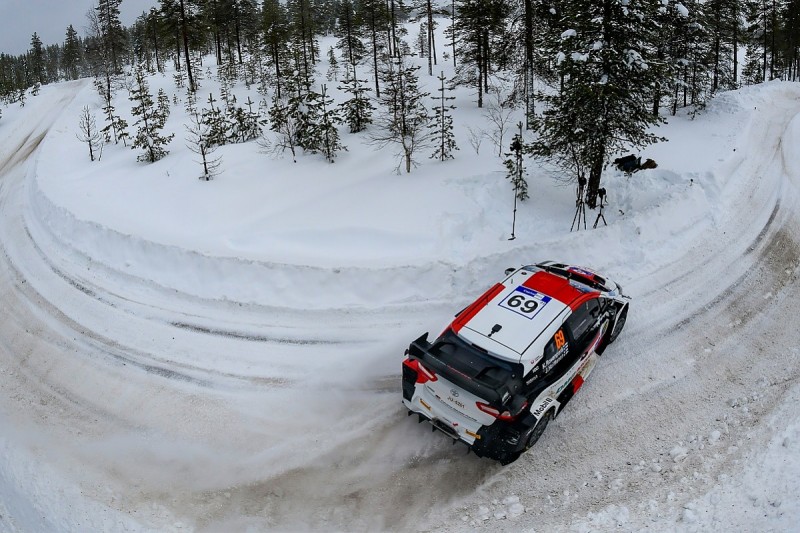 "The stages are incredibly fast and at that speed, never seeing the roads, the pacenotes are never 100% and you always have places where it's a bit this way or the other way... so far so good!"

In WRC2, the return of former M-Sport driver Esapekka Lappi in a VW has seen the Finn build a 33s advantage over Norwegian championship leader Andreas Mikkelsen's Skoda, having won all five of the stages run so far.

The battle for WRC3 honours is currently separated by just 3.3s, the advantage with Finnish driver Teemu Asunmaa's Skoda ahead of Estonia's Egon Kaur in his VW.

The same loop of three stages will be repeated this afternoon with large sections of snow expected to have been scrubbed away by the passage of the cars to expose underlying gravel.

Successfully balancing the demands of pace and tyre management is therefore expected to be at a premium to reach the end of the day safely.