World Rally champion Sebastien Ogier expects Toyota to set the Rally Finland pace again this season, and will focus on his title battle with Thierry Neuville

Ogier starts the second half of the season chasing a 27-point deficit to Neuville, the first time in six years he has not led the standings at the summer break.

"We know Toyota is testing a lot in Finland and their car is very strong on these kind of roads," Ogier told Autosport.

"I think they will be the benchmark this week.

"But as well as the car, they have two Finnish drivers [Jari-Matti Latvala and Lappi] and they have Ott [Tanak] - all of them love the fast stuff.

"We saw their speed last year and I think there's a very good chance they will be the ones to beat."

Ogier's M-Sport team-mate Elfyn Evans managed to get second between the Toyotas of Lappi and Juho Hanninen in Finland 12 months ago.

"The Toyotas were uncatchable last year and we'll have to see how much we have found this year - but they also have three drivers who are very strong," said Evans.

"I'm going there aiming for the win, that's what you have to do." 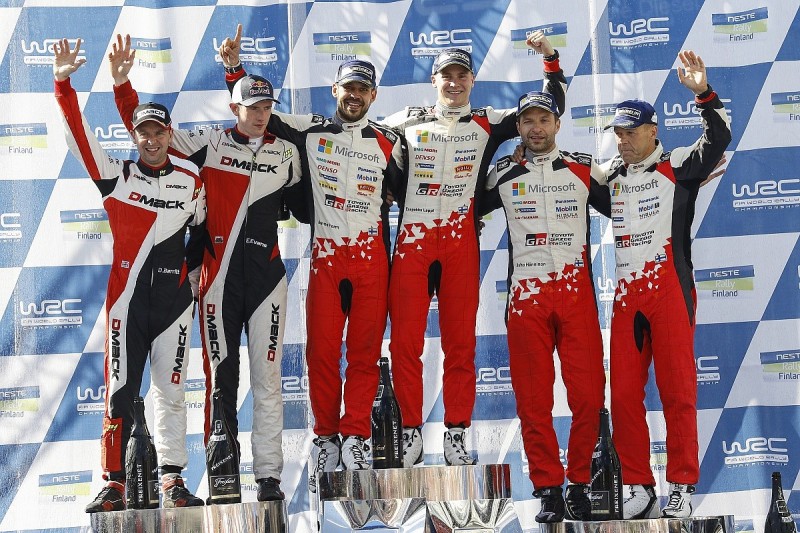 Last year Ogier crashed in Finland and Neuville could only finish a muted sixth.

"Of course, a win would be the best result for me," Ogier added. "But my fight with Thierry is more important."

Toyota driver Tanak is third in the championship and chasing a first Finland win for an Estonian since Markko Martin's 2003 victory.

He was not convinced by Ogier's suggestion Toyota will be the benchmark.

"We know what Ogier is like, we know what a fighter he can be," Tanak told Autosport.

"It will be the same like always, a close fight.

"I feel good for this rally. We did [Rally] Estonia and the car felt good, we made some interesting steps with the suspension and I think we are ready.

"It would be nice to beat the Finns in their own backyard - but that's not going to be easy, there are four of them in good cars with a very good chance this year.

"And it's not just the Finns, there's Sebastien and, as we saw last year when he was on the podium in Finland, Elfyn will be quick as well.

"It's always a big fight on this rally, but it would be good to go there and make life difficult for the locals."