Sordo is the second Hyundai driver to be dropped for a rally recently, after Hayden Paddon was sacrificed to make way for new signing Andreas Mikkelsen in Spain last week.

Last year's Rally Australia winner Mikkelsen will be joined in the Hyundai line-up for Australia by Thierry Neuville and Paddon.

All four i20 Coupe WRC drivers will contest Rally GB this month, but Hyundai said maintaining a four-car entry for Australia was logistically impractical.

Hyundai team principal Michel Nandan said: "The complexity of logistics for Rally Australia meant that we were not able to run a four-car entry, although that would have been the ideal solution.

"We had to make the decision based on which combination of crews we felt would give us the strongest all-round chance on the Australian gravel.

"Thierry scored our first Australian podium last year, an event that was won by Andreas and Hayden has made continuous improvements year-on-year in this rally.

"We want to finish the season in the most competitive way possible, to lay ourselves strong foundations for next year - that's our aim." 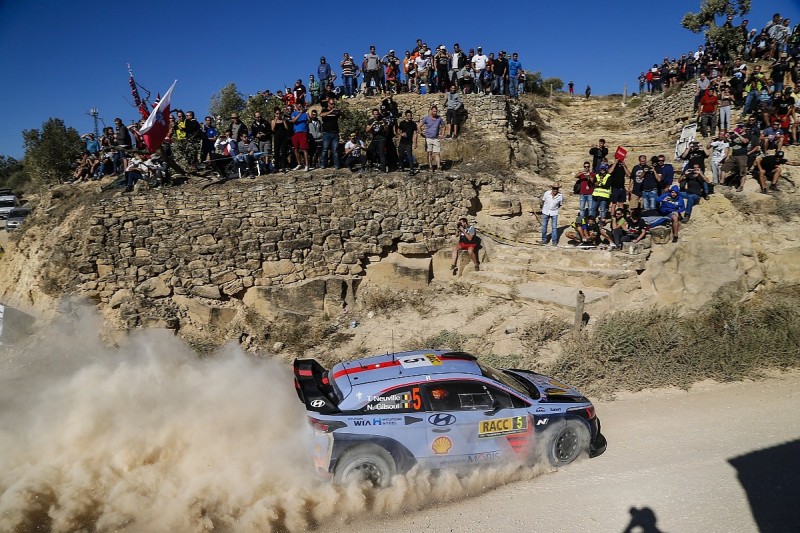 Hyundai's hopes of lifting a maiden WRC title are likely to be dashed at Rally GB later at the end of this month, where its rival M-Sport needs to pick up just four of an available 43 points to be crowned manufacturer champion.

In the drivers' standings, if Neuville fails to score at least eight points more than Sebastien Ogier on Rally GB, then an M-Sport driver is guaranteed the title.

Ogier leads the standings, 37 points ahead of Ott Tanak, with Neuville one point behind him.