Hyundai's Thierry Neuville has tempered his team's hopes of victory in this weekend's Arctic Rally, ahead of the second round of the 2021 World Rally Championship

Team principal Andrea Adamo has declared that "nothing less than victory" is acceptable for the defending manufacturers' champion on the WRC's first visit to Lapland, which is a late COVID-related substitution for Rally Sweden as the only snow event on the 2021 calendar.

PLUS: What to expect from the WRC's Arctic venture

Neuville eventually recovered to finish third in his first event alongside new co-driver Martijn Wydaeghe, but the pairing was 73 seconds shy of winner Sebastien Ogier's Toyota at the finish after multiple setbacks.

Dani Sordo salvaged fifth place after floundering on the wrong tyres during the opening day, but 2019 world champion Ott Tanak was forced out of the event after electing to carry only one spare wheel and suffering two punctures in quick succession.

In Lapland this weekend, tyre management will be a prominent issue once again after the recce revealed that, even within the Arctic Circle, large areas of snow will be cleared after the first pass on each stage.

It is also understood that Toyota has successfully lobbied the event organisers to send a snow plough through in order to minimise the delay that virgin snow causes to its drivers Sebastien Ogier and Elfyn Evans, who start in front of Neuville on the opening day. 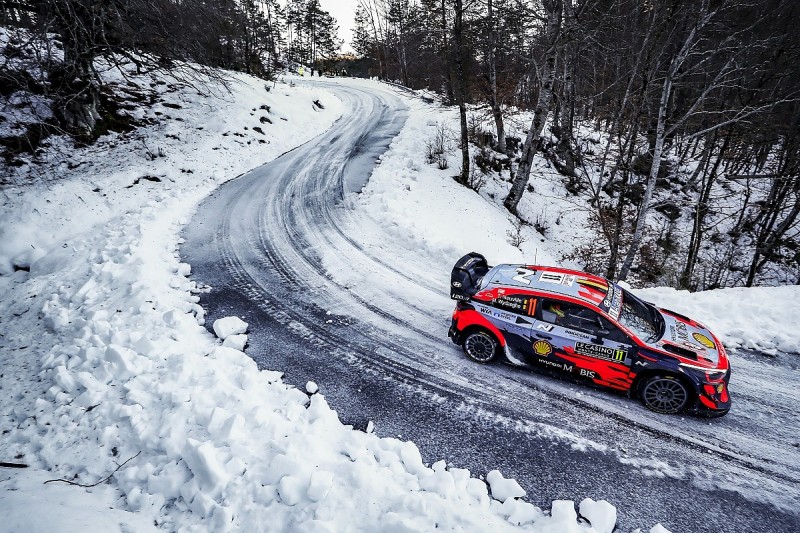 "I can't say that I was 100% happy about the preparation and the feeling, even if it wasn't bad," Neuville said.

"We suspect that the Toyota's going to be very fast from the last years' experience [on Rally Sweden], and also from [its] Monte Carlo speed: they were strong.

"So let's try and hope to benefit from a good road position compared to the two [Toyotas] in front of me... we're going to try to fight but I'm not sure it will be possible to do the maximum."

Neuville's caution before the start of the event may lack some of Adamo's bullish lustre, but even so the Belgian remains convinced that another strong result may be conjured by Sunday afternoon.

"I think we had probably, for my feeling, better chances to win Monte Carlo than to win [this weekend], from my point of view," he said.

"But to be honest I have always had good speed in Sweden over the last couple of years and I hope that with clever driving we can still bring home a good position for the team."

Hyundai: Nothing but Arctic Rally Finland WRC win will do