Ott Tanak leads a Toyota 1-2-3 ahead of Sunday's final Rally Germany stages, as his World Rally Championship rivals Thierry Neuville and Sebastien Ogier both punctured on the Panzerplatte test.

Hyundai driver Neuville and Tanak had been embroiled in an intense battle for the lead on Friday that continued into Saturday morning.

Neuville began Saturday 2.8 seconds behind Tanak and had the stronger pace across the morning, but managed to lose 2.2s over the course of the leg after a stall at a hairpin on the first Romerstrasse run.

Tanak responded to the threat by extending his overall advantage to 5.6s on the first pass of Arena Panzerplatte, before the fight was defused on the following 26.08-mile Panzerplatte stage.

Neuville collected a rear-left puncture early on the stage, but incredibly minimised the time loss to just 1m26.8s after stopping to change it. Nonetheless, he plummeted from second to an initial seventh place.

Tanak subsequently backed off with the protection of his two team-mates behind him, and will start Sunday with a 32.4s lead.

Jari-Matti Latvala took three seconds out of Kris Meeke across the first three stages of the afternoon, but was outgunned by Meeke - who put in "the best Baumholder drive I've ever done" in the region - on the second Panzerplatte pass to maintain second, 9.4s ahead of Latvala overnight.

Both runs of Panzerplatte were difficult for Citroen's Ogier. 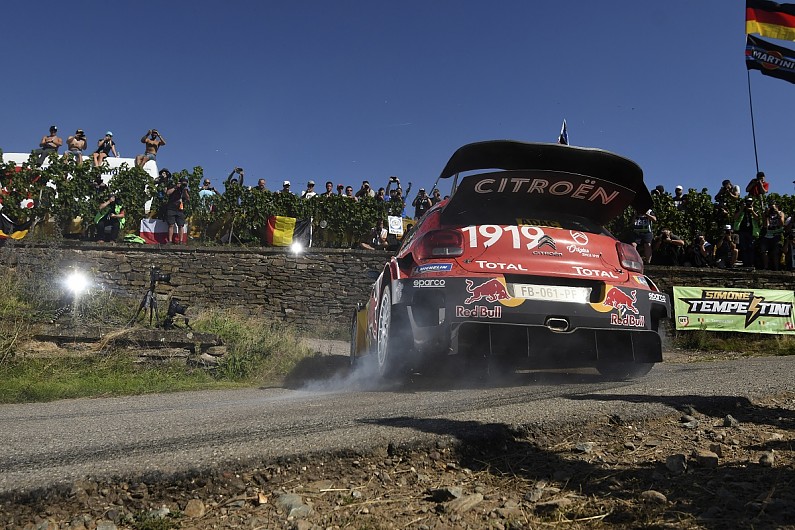 On a stage the world champion has traditionally excelled on, Ogier gave it "everything I have" on the first pass but was overhauled by both Meeke and Latvala and dropped to fourth behind the trio of Toyotas.

That set the tone for the rest of the afternoon, with a stall hampering him on the penultimate stage of the day.

A puncture on the second run through Panzerplatte compounded his woes, dropping him from fourth to eighth place.

Neuville also overhauled Mikkelsen on the day's final stage despite losing the rear of his i20 Coupe WRC and spinning the car.

He recovered from his earlier puncture to hold fifth, sandwiched by his two Hyundai team-mates.

A frustrated Lappi is seventh and vocalised his frustrations with his performance in the Citroen C3, describing the second run at Panzerplatte as a "nightmare" where "the time was rubbish."

Greensmith's team-mate Teemu Suninen survived a power-steering scare to complete the loop with multiple top-five stage times, but is still more than 40 minutes behind after his early electrical retirement on Friday. His focus is therefore already on Sunday's points paying powerstage.