Neuville had chopped 1.3 seconds out of Tanak on the first run of Freisen to trim the Toyota's overall advantage to 1.5s.

But he overcooked his entry and stalled into a hairpin on the proceeding Romerstrasse test and dropped 6.7s to Tanak, who won the stage when a stubborn fuse delayed Neuville further when trying to restart the Hyundai.

Neuville nicked 0.2s back on the repeat of Freisen and another 1.5s on Romerstrasse 2 to trail Tanak by 5s heading into the afternoon.

Battling with understeer on Friday, Sebastien Ogier was still "fighting" his Citroen throughout the morning, describing the C3 as "difficult to drive."

The world champion remains third with Kris Meeke 3.7s in arrears, but Meeke declared he wasn't interested in Ogier's times, instead choosing to focus on securing manufacturer points for Toyota.

Team-mate Jari-Matti Latvala is close too, just 4.2s behind in fifth. A trip into a field aside, Andreas Mikkelsen holds a solid sixth place for Hyundai.

Esapekka Lappi had been plugging away at Mikkelsen's advantage, but dropped the rear of his Citroen into a ditch on Freisen 2.

Spectators were immediately attentive and forced weight onto the front of the C3 that allowed Lappi to escape, but the error allowed Dani Sordo to take his seventh position.

Sordo found himself ninth at the start of the leg following his gearbox turmoil on Friday's final test. The Hyundai driver was fastest on Freisen 1 and is just 9.9s behind team-mate Mikkelsen with Lappi only 1.8s behind. 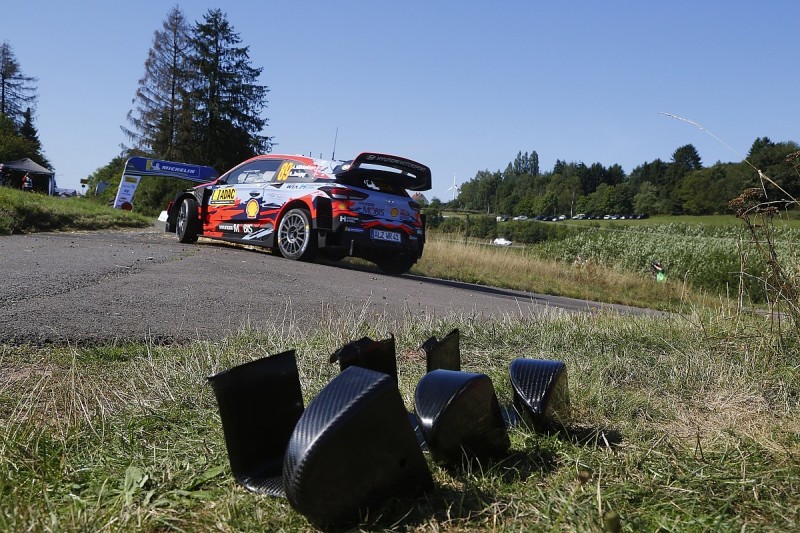 Gus Greensmith began Saturday in eighth as the lead M-Sport Ford but slipped backwards when he slid off the road and clipped a tree on Saturday's opener.

The impact broke the front-right steering arm, knocking the rear-right tyre off its rim for good measure. He dropped three minutes to stage winner Sordo but recovered to finish the morning in 10th.

That means Takamoto Katsuta is into the top 10 in ninth place on his first World championship event in a Toyota Yaris WRC.

Skoda's Kalle Rovanpera was on for a fifth consecutive WRC2 Pro victory, but made a "stupid mistake" on the first run of Freisen.

Failing to add enough caution to the left-hand corner in his pace notes, Rovanpera slid wide and onto the grass, nosing his Fabia R5 into the undergrowth and beaching it before spectators helped wrestle him free.

Rovanpera's "beginner" form continued on the proceeding Romerstrasse test when he dropped the right-hand side of his Fabia into a road-side ditch.

He persevered and freed his Fabia without spectator assistance. Team-mate Jan Kopecky now leads the class in 11th overall.

Teemu Suninen returned following his retirement with electrical issues on Friday but is over 40 minutes adrift of the lead.

The famous Panzerplatte tests in the Baumholder military range lie await in the afternoon, where tyre management will be key.