Tanak headed onto the powerstage 26.7 seconds ahead of Sordo, but plummeted down to fifth after spinning his Toyota and losing two minutes as he wrestled with his Yaris.

Although the long-time rally leader declined to talk to reporters at the finish and Toyota said it had no immediate idea of what went wrong, in-car footage showed Tanak seeming to struggle with the steering.

An emotional Sordo claimed his second WRC victory by 13.7s over M-Sport's Teemu Suninen, who on his first event with new co-driver Jarmo Lehtinen. Andreas Mikkelsen was third.

Sordo had led in Sardinia on Friday, but was overhauled by an inspired Tanak - who won all six of Saturday's stages to overturn a 11.2s deficit into a 25.9s advantage.

Tanak's plan was to conserve his lead and win his third event in succession, but his final stage drama robbed him of the result.

Despite this Tanak now has a four point lead in the championship over Sebastien Ogier with Thierry Neuville a further three points back, after both Ogier and Neuville had weekends to forget.

Ogier had finished on the podium on every rally since Mexico, but scuppered his chances of a rostrum finish in Sardinia when he clipped a boulder on Friday morning, breaking his Citroen's front-left steering arm.

With no spare, he retired before returning on Saturday and breaking a suspension part again, this time on the rear-left.

He conserved his tyres on Sunday for the powerstage, salvaging four points from his weekend with the second fastest time.

Neuville had a messy Friday. First a miscommunication between him and co-driver Nicolas Gilsoul resulted in a half spin that damaged their Hyundai's radiator, and then he over-committed into a junction and overshot it.

These misdemeanours dropped an insurmountable amount of time, meaning he had to settle for sixth and three powerstage points. 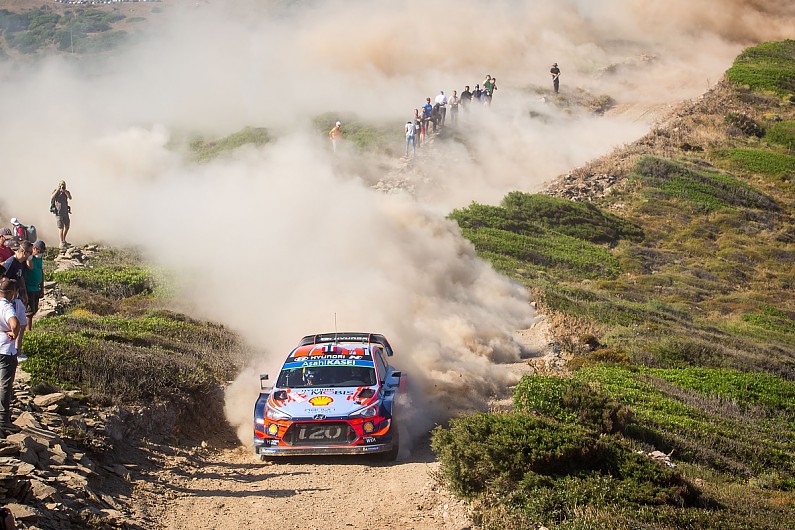 Mikkelsen overhauled Elfyn Evans for what became a podium place on the final stage after a battle that raged for two days.

Beginning Sunday 14.9s behind Evans, Mikkelsen ate into that gap with all four stage wins on Sunday, including the powerstage, to take the position by just 0.9s on his first rally since Argentina in April.

Esapekka Lappi haemorrhaged time on Friday afternoon when he whacked a bank with his Citroen C3, pushing the rear-left tyre off its rim. He kept out of trouble thereafter to seal seventh ahead of Toyota's Kris Meeke.

Meeke had been challenging Evans and Mikkelsen for fourth on Saturday, but lost two minutes when he was forced to change a broken wheel.

Jari-Matti Latvala had led the rally on Friday morning, before his challenge faltered when he rolled his Toyota in a tight hairpin in the afternoon.

His day got worse when he slipped off the road and into the wilderness on Friday's final stage, forcing him into retirement for the day.

Juho Hanninen was entered in a fourth Toyota for his first WRC event since 2017 so the team could test various components and set-up options.

He was registered as a retirement as he elected not to contest the event-closing powerstage.