The battle between Tanak and Hyundai driver Sordo was fierce throughout Saturday, but the contest defused on Sunday morning.

Tanak was quicker than his rival through both the morning's stages, extending his gap out front by 2.8s as he judged his pace against a careful Sordo.

M-Sport's Teemu Suninen elected not to push Sordo too hard for second place, instead deciding to conserve third and focus on banking his first podium position since Portugal last May.

The battle for fourth place between Elfyn Evans and Andreas Mikkelsen resumed on Sunday, but the gap stretched from 7.9s to 14.9s before a wheel had been turned because Evans was handed an amended time in recompense for getting caught in Kris Meeke's dust on Saturday's final stage. 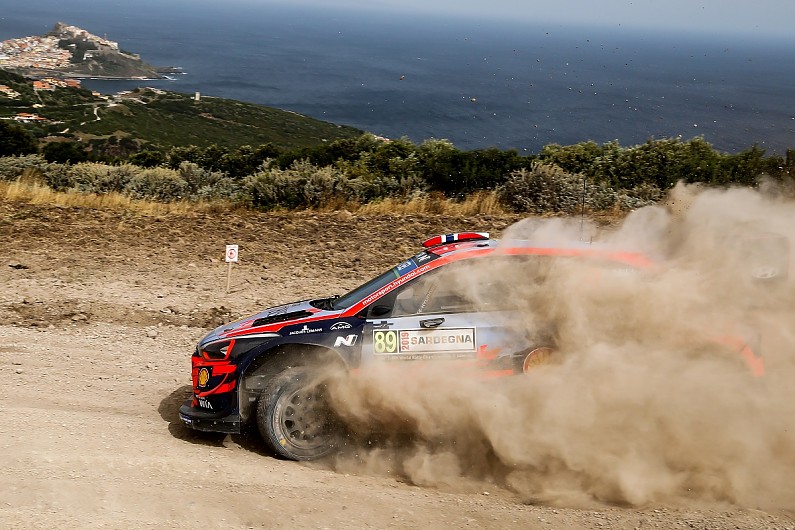 Mikkelsen nibbled 0.2s from Evans's advantage by winning the Cala Flumini test, and mugged another 5.5s from him with another stage win on Sassari-Argentiera to chop the gap down to 9.2s.

On his 31st birthday, Thierry Neuville finds himself sixth overall with a comfortable gap to Esapekka Lappi behind him.

Neuville's focus is firmly on the powerstage, but there is the potential that he could move ahead of team-mate Mikkelsen with team orders in a bid to limit his points loss in the championship to rally leader Tanak, should Mikkelsen fail to overhaul Evans for fourth.

Citroen driver Lappi admitted his day was looking quite "boring" as he looks to bring his car home in seventh.

Eighth-placed Meeke took it steady in his Toyota Yaris WRC following his Saturday puncture, declaring "I have no choice in the powerstage, I'm just driving through and concentrating on Finland now".

Sebastien Ogier had his tactical head back on as he drove at an extremely conservative pace in order to save his tyres for the powerstage.

The world champion was first on the order on Sunday's opener, but then checked in 10 minutes late to the regroup between Cala Flumini and Sassari-Argentiera, slotting into the middle of the pack in the road order.

He then pushed through Sassari-Argentiera as a dress rehearsal for the powerstage.

Ogier's choice handed road sweeping duties to Toyota's Jari-Matti Latvala on Sassari-Argentiera; the second time in Sardinia he has been forced into that position.

Latvala's team-mate Juho Hanninen dropped outside the top 10 when his Toyota was retired from leg two at the end of Saturday to give the team more time to repair a broken engine mount.