Rally Sweden leader Teemu Suninen will have the full backing of the M-Sport team to risk everything in his pursuit of a maiden World Rally Championship win this weekend.

Suninen starts day two with a two-second advantage over Toyota man Ott Tanak as he leads a WRC round for the first time.

In the absence of any manufacturers' title aspirations this year, team principal Rich Millener has encouraged his driver to push as hard as possible in pursuit of victory.

Follow Rally Sweden as it happens with Autosport Live from 6.30am UK time

M-Sport only managed to secure its 2019 WRC programme at the last minute and has described this season as a rebuilding year having had to invest hugely in the campaigns that took Sebastien Ogier to the previous two titles.

"We'd much rather advertise a win than four third places," Millener told Autosport.

"We haven't discussed the plan with Teemu, but that's because there's nothing to discuss - we want to win some rallies and Teemu's got to learn how to deal with these situations.

"We'd rather win the rally than just make the numbers up and score points. Our ideas and goals are not quite the same as last year.

"OK, if he has a spin or something then we would reassess, but as it stands he can push and go as hard as he can."

Suninen is likely to start Saturday morning's loop of three stages with just one spare wheel aboard his Ford Fiesta WRC - a move that would save 25 kilos in weight.

Millener added: "We'll have to wait and see what the weather's like in the morning, but you could gamble on five [tyres] and I'd imagine that's what they're likely to do.

"Let's face it, the job's a little bit finished if he gets a puncture, so in the pursuit of performance we'd be much better taking less weight." 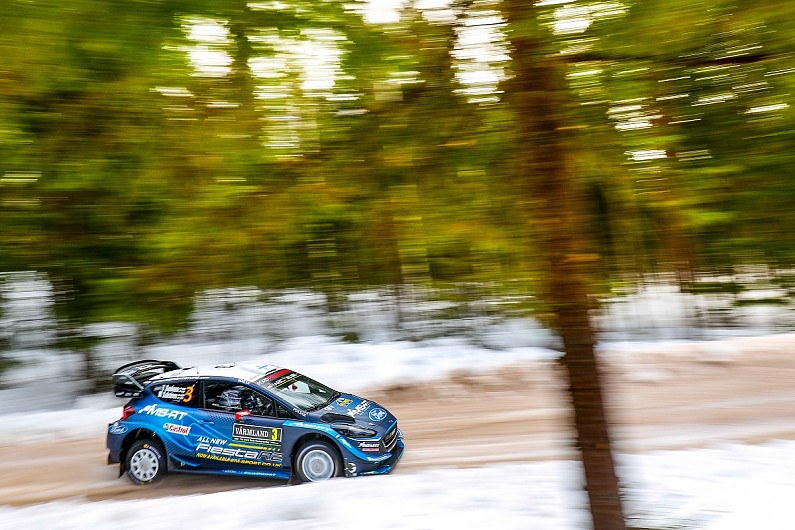 Having won two of the day's seven stages, Suninen's impressive performance was only spoiled when the lightpod became detached from the bonnet, costing him five seconds on the short Torsby stage that ended the day.

"That was a bit frustrating," said Millener. "Teemu just missed one of the connections on the lightpod and it flipped up.

"When you're fighting with Tanak, a seven or eight-second lead is better than two seconds - we know he's going to be strong tomorrow.

"Certainly, if we lose this rally by less than seven seconds then we'll be kicking ourselves into the middle of next week."

After much pre-season debate about M-Sport's chances this season, Millener was happy with the performance.

Suninen's team-mate Elfyn Evans bounced back from a morning spin with two fastest times of his own in the afternoon and is now fourth.

"We've had a good day today," Millener concluded. "We're the manufacturer with the most fastest times. Not a bad Friday."