Breen missed out on a WRC seat this season after two years with Citroen, as the French marque slimmed its entry down to two cars and signed Sebastien Ogier and Esapekka Lappi as its drivers for 2019.

Breen co-drove for his father Ray on a local gravel event - the Willie Loughman Rally - in Kilkenny earlier this month, but has not competed on Irish soil since a one-off Ford Escort Mk2 outing in 2017, co-driven by his friend Patrick Croke.

The 28-year-old last contested an Irish Tarmac round when he won his second straight Circuit of Ireland Rally in 2016 when the event was part of the European Rally Championship.

He has also confirmed his participation on the Galway International Rally on February 9 and could do more events in his home nation while he is without a WRC seat.

"This is by no means a sign of our intentions in the WRC," Breen wrote on social media.

"Since I was a child I have loved everything about Irish rallying more than anything else, and suddenly having the chance to do these events is something that genuinely brings a smile to my face during these difficult times.

"After all, the best roads in the world are sitting here waiting all over Ireland!"

After only having four R5 cars entered into the last Irish Tarmac round of 2018, Autosport understands that 25 of the cars are on the entry list for the Galway International.

It is a one-day event with just under 75 stage miles. It is based in Ballybrit in Galway.

Armstrong - who competed in what is now the Junior WRC in 2016 - has been working with Codemasters on the new DiRT Rally game, released on February 26.

As part of the game's launch, Armstrong will compete in reality for the first time in 16 months.

"I think it will be a really good talking point for the game, when people see the DiRT name on the side of the car," said Armstrong, who will be partnered by his usual navigator Noel O'Sullivan.

"It's a one-off at the minute. If the first one goes well, it would be hard not to try and get the budget together and do some more."

Armstrong set a WRC 2 stage winning time in Rally Germany on his R5 debut (below), after winning two class prize drives in 2017 for winning rallies in the JWRC - then the Drive DMACK Trophy. 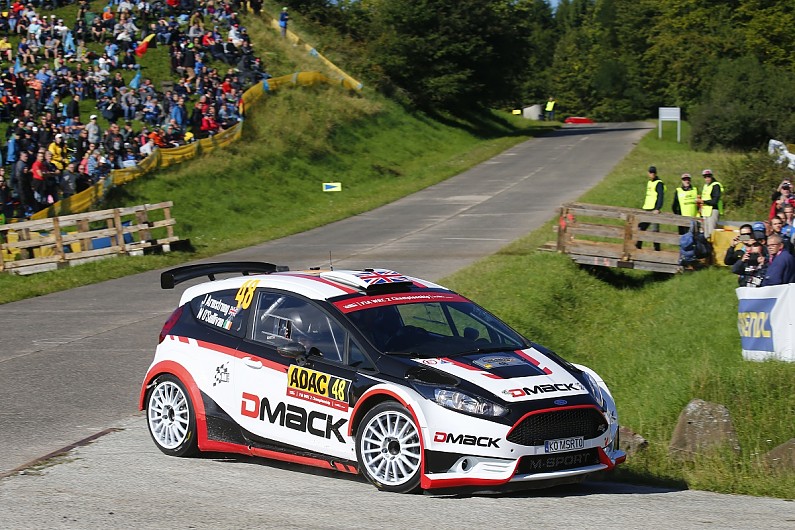