Andreas Mikkelsen stormed into an early lead on the 2017 World Rally Championship finale in Australia with a clean sweep of Friday morning stage wins for Hyundai.

At first Kris Meeke's Citroen was able to tag along with Mikkelsen as they broke clear of their rivals.

But a mistake on Sherwood, the final stage of the loop, forced Meeke to reverse to get back on course.

Mikkelsen and Meeke both benefited from being further down the start order - ninth and sixth respectively - on the dusty stages.

WRC champion Sebastien Ogier had long expected to struggle on the opening day in Australia as he swept the road for rivals behind.

Though he was a surprise third quickest on the short opening Pilbara stage, Ogier quickly fell away thereafter, hampered further by losing his automatic gearshift on middle stage Eastbank.

He heads for midday service in eighth place, just under half a minute off the lead.

The pack behind Mikkelsen concertinaed on Sherwood. Though Meeke hung onto second, he heads a group of six cars covered by just 5.4s. 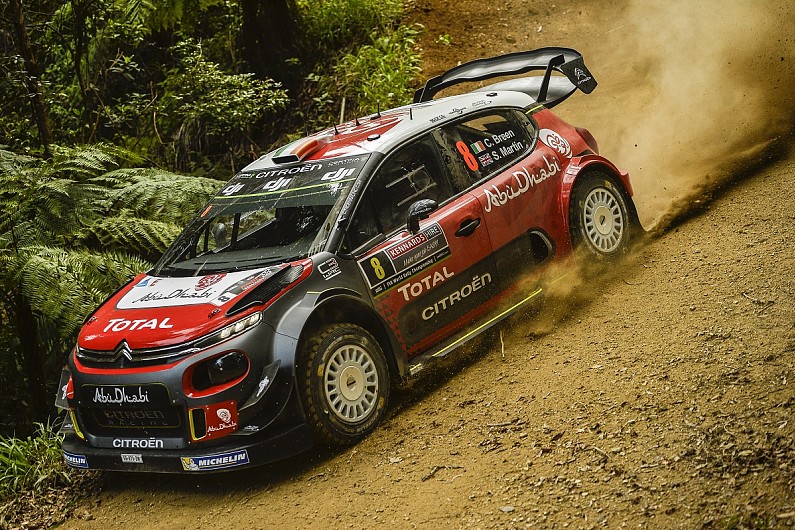 Breen is three seconds clear of Thierry Neuville, who has Ott Tanak, Jari-Matti Latvala and Hayden Paddon within 1.3s of his tail.

Both Tanak and Latvala damaged their cars on the first stage, Tanak losing the diffuser from his M-Sport Ford and Latvala the front splitter from his Toyota.

Tanak admitted it took him two stages to get his head around how to drive the car with the damage, but he figured it out on Sherwood and moved up from eighth to fifth with the third-fastest time.

Stephane Lefebvre picked up a right puncture on the first stage and has since driven cautiously as he had used up his sole spare tyre. He runs ninth.

Rally GB winner Elfyn Evans knew his DMACK tyres would struggle in the very different conditions of Australia and he is already 43.4s away from the lead in 10th.

Esapekka Lappi's rally went awry early when his Toyota lost its power steering on Eastbank. By the end of the following stage he had lost over three minutes to the leaders.