Hansen started on the front row of the title-deciding final having won semi-final two, with championship rival Andreas Bakkerud alongside.

RX Cartel Audi driver Bakkerud had beaten polesitter Gronholm to the first corner in semi-final one and taken victory to lift him to the front row of the grid.

By finishing one place ahead of Bakkerud in the Intermediate Classification, Hansen increased his points lead to two points.

With both drivers then winning their semis, they entered the final race of the season separated by the same margin.

At the start of the final, it was again Bakkerud who made the best launch to go around the outside of Hansen for the lead.

With eight points available for victory and five for second, winning ahead of Hansen would have been enough for Bakkerud to claim the title.

But, at the loose-surface Turn 6 on the Killarney circuit on the outskirts of Cape Town, Hansen made a move for the lead, putting the nose of his Peugeot 208 up the inside of Bakkerud's Audi S1 into the exit of the corner.

Bakkerud slid wide and into the tyre wall on the outside, bouncing off the wall and into Hansen - who was spun around the front of the Audi.

Bakkerud's Audi also ended up facing the wall on the outside of the circuit, while behind, Hansen's brother Kevin - the third of the title contenders - spun in the dust cloud onto the inside of the track.

Amid the melee, Gronholm moved into the lead. 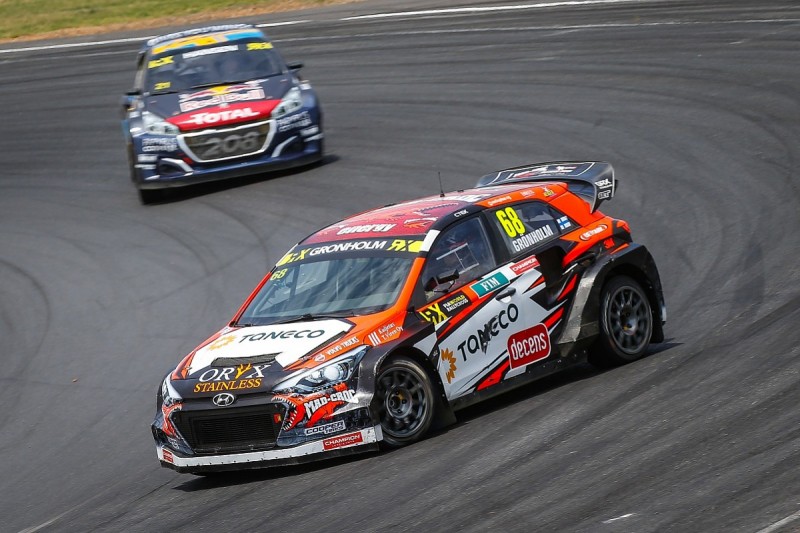 Bakkerud ran second, with Gronholm's GRX Hyundai team-mate Timur Timerzyanov, who had taken his joker on the opening tour, third and double DTM champion Timo Scheider having his best race of the season in fourth.

With Hansen recovering to run behind Scheider in fifth, second for Bakkerud would have been enough to claim the title.

Scheider fell behind Hansen following his lap two joker, then clipped a tyre barrier and sustained wheel damage before later parking up.

Bakkerud remained ahead of Timerzyanov after his lap five joker, but when Gronholm took his compulsory extra route on the final tour and remained ahead to claim his second win of the season, second for Bakkerud and fourth for Hansen put the pair level on points to end the year.

On countback, with four wins to Bakkerud's one, it was 14-time European Rallycross champion Kenneth Hansen's eldest son Timmy who secured his maiden World Rallycross crown.