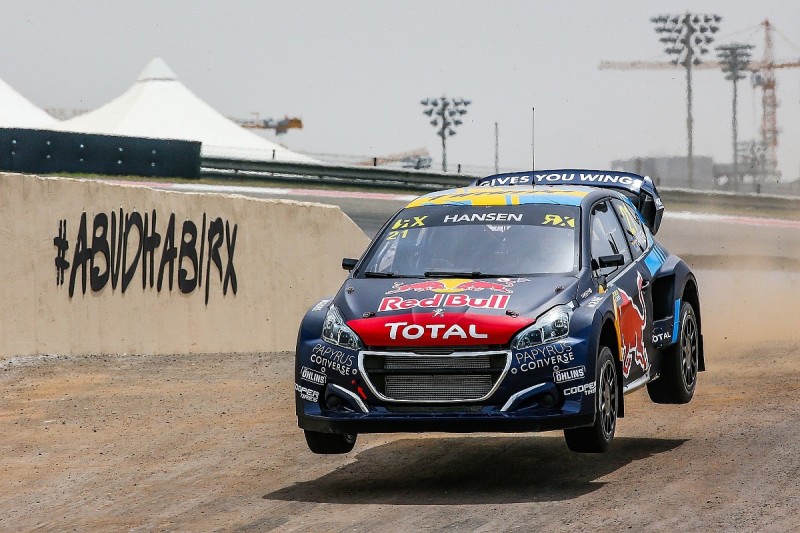 Hansen's father Kenneth has reformed his team for this year following the end of Peugeot's works WRX programme, and begins the season among the title favourites.

Timmy Hansen won the last race of Q1 in front of Niclas Gronholm to better the time set by younger brother Kevin earlier in the session, then maintained track position, but only just, ahead of Andreas Bakkerud in their Q2 contest.

With the Q2 race order reversed following a random draw - a new procedure for 2019 designed to alternate whether the slowest or fastest drivers from the previous run get the best track conditions - Timmy Hansen was given ample space in the run to the first corner by his brother, who had started alongside.

Kevin then lost track position to Gronholm and Bakkerud through the opening sequence - Turns 5, 6 and 7 of the F1 layout.

Bakkerud took his joker on the opening tour, but the older Hansen sibling covered him off with a lap three trip into the extra-route section and stopped the clock with a near identical time to the first run.

Having won his race in Q1 and been fifth fastest, second to Hansen in Q2 lifted Bakkerud into second overnight, as the racing went on into the evening in Abu Dhabi. 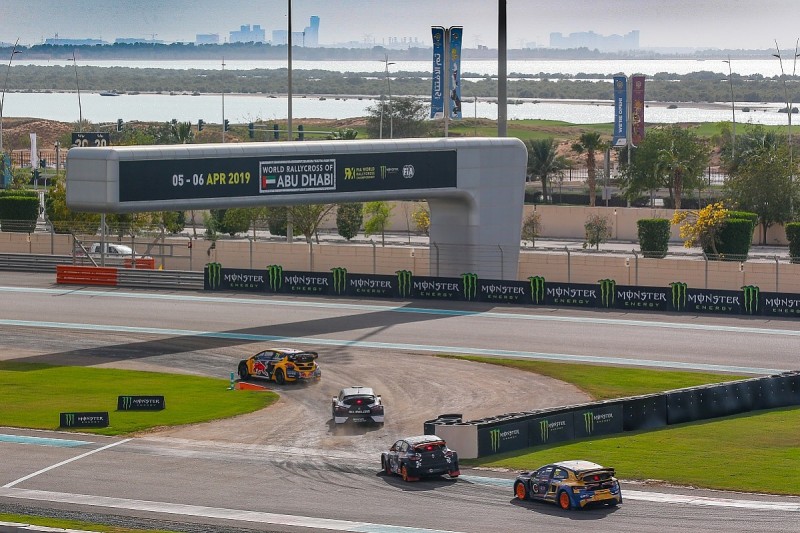 Double European Rallycross champion Anton Marklund had a strong opening day of the campaign for GC Kompetition, winning both of his races with the Renault Megane to end up fifth. Double DTM champion Timo Scheider ended up sixth.

Fastest in the early part of practice, reigning Euro RX champion Reinis Nitiss dropped to second behind GRX stablemate Gronholm by the end of the early running, then was slowed by a puncture and then clutch problem in his Q1 race, leaving him 14th and slowest of those that made it to the finish line.

In Q2, Nitiss won the race to the first corner had a clean run ahead of Supercar rookie Rokas Baciuska and struggling Brit Liam Doran to be third fastest and climb back to seventh in the overnight classification.

Super1600 champion Baciuska meanwhile impressed on his and the ES Motorsport team's World RX debut with its Skoda Fabia, a solid 11th in Q1 bolstered by seventh in Q2 putting him ninth overall.

RX Cartel team driver Doran was slowed by issues with operating the anti-lag on the EKS Audi S1 in Q1, then had gear selection problems in Q2 that hampered his cause further - putting him 13th overnight.

He missed Q1 due to a radiator issue with his GCK Academy Renault Clio, then battled with team-mate Cyril Raymond in the opening corners of the final race of the day in Q2 only to first slow at the end of the third lap thinking it was the last and then stop at the finish with a pool of coolant under his car.