Conway led the early stages in the #7 machine from Neel Jani in the leading #1 Porsche.

But after the first round of stops, Buemi emerged in second and was much closer to Conway.

Buemi then went around the outside of the leader through Arnage to claim the place later around the lap and he now leads by 1.6 seconds.

Porsche sits third and fourth with Jani ahead of Timo Bernhard in the #2 example.

The top five is rounded out by Nicolas Lapierre in the third Toyota, which suffered damage on the opening lap and had to have its nose changed during its stop.

The ByKolles car initially passed Lapierre at the start before running wide at Terte Rouge and hitting the barriers.

It limped back to the pits but, after briefly rejoining the track, returned to the garage and is now 10 laps down on the leaders. 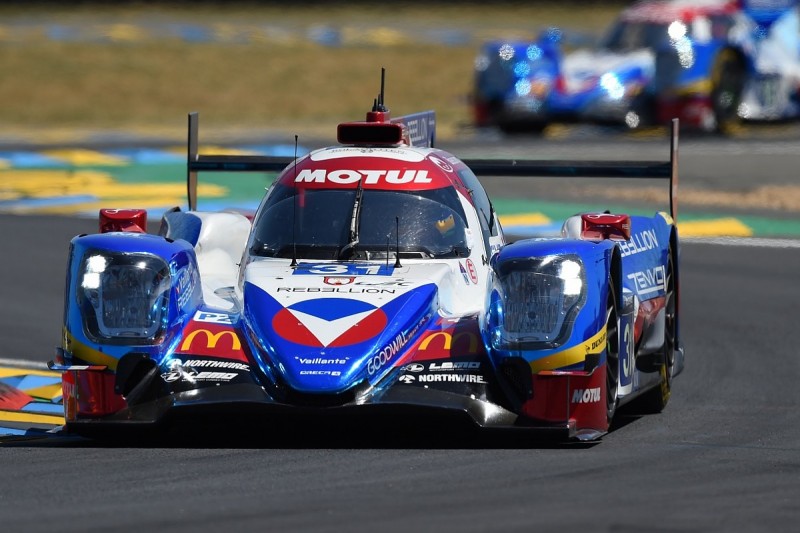 With polesitter Roman Rusinov plummeting to 14th on the opening lap in the TDS-run #26 G-Drive ORECA, Oliver Jarvis led the early stages.

The #38 Jackie Chan DC Racing driver kept the #31 Rebellion ORECA of Bruno Senna at bay until making its first stop at the end of lap eight.

But a delay getting away cost Jarvis around 25 seconds, and once the first round of stops had shaken out he was down in sixth and almost half-a-minute down.

This meant Senna moved into the lead, chased by the #25 Manor ORECA of Vitaly Petrov and the sister #24 car of Jean-Eric Vergne, who briefly led after staying out a lap longer before stopping.

Initially, Petrov closed the gap, but at the end of the first hour it had settled at nine seconds.

The #13 Rebellion ORECA of Nelson Piquet Jr runs fourth ahead of the #37 Jackie Chan DC Racing ORECA in the hands of Tristan Gommendy and sixth-placed Jarvis.

The lead non-ORECA is the #27 SMP Dallara of Mikhail Aleshin, which runs seventh, with the best of the Ligiers, the #32 United Autosports car, 10th with Filipe Albuquerque at the wheel.

Rusinov did climb back into the top 10, but he pitted early for a new nose and now runs a distant 19th.

The way he entered the pits, cutting back across the runoff area to join the pit entry, possibly after a spin, is being investigated by the stewards.

Last year's LMP2 winner, the #36 Signatech ORECA, had a disastrous start to the race.

Gustavo Menezes plunged into the gravel at Mulsanne Corner and ended up stuck in the gravel up against the barrier.

He was eventually recovered and returned to the pits to hand over to Matt Rao but has dropped two laps off the lead.

The #22 DragonSpeed ORECA also hit trouble, as it pitted at the end of the fifth lap but has yet to re-emerge.

ASTON AHEAD IN GTE PRO 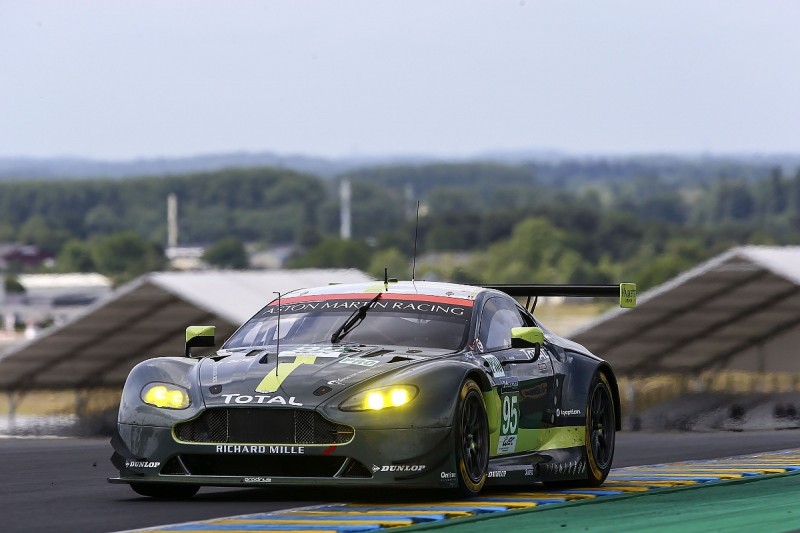 The GTE Pro battle proved as tight as expected as second-place qualifier Alessandro Pier Guidi (#51 AF Corse Ferrari) got the drop on polesitter Darren Turner (#97 Aston Martin), but his lead lasted only until the third lap.

Nicki Thiim (#95 Aston Martin) passed both Turner and Pier Guidi and then gradually built up a margin as the remaining GTE Pros ran nose-to-tail.

Frederic Makowiecki gained three places in the opening lap to put the #91 Ferrari into 10th ahead of Toni Vilander's #82 Risi Ferrari and the #67 and #68 Ganassi Team USA Fords of Andy Priaulx and Joey Hand.

Porsche played a blinder in the pitstops, enabling Estre to emerge third behind Thiim and Turner, only to be robbed by Pier Guidi the following lap.

Westbrook was the biggest casualty of the pitstops, dropping from fourth to eighth behind Thiim, Turner, Pier Guidi, Estre, Mucke, Bird and Garcia.

Makowiecki and Priaulx jumped Gavin in the stops to run ninth and 10th, and Hand jumped Vilander for 12th.

GTE Am polesitter Fernando Rees got off to an explosive start in the #50 Larbre Viper, briefly passing Hand's GTE Pro Ford, but still had enough pace in hand to pull well clear of second-place qualifier Pedro Lamy's #98 Aston Martin once Hand got by.

During the stops, though, Scuderia Corsa and TF Sport turned round their cars faster to put Townsend Bell (#62 Ferrari) and Rob Bell (#90 Aston) ahead of both of them.

POSITIONS AFTER ONE HOUR