The Japanese manufacturer has confirmed that it will run its #7 entry to be driven by Alex Wurz, Nicolas Lapierre and Kazuki Nakajima at Fuji alongside the #8 car shared by Anthony Davidson, Stephane Sarrazin and Sebastien Buemi.

The latter trio will again drive Toyota's solo entry at this weekend's Austin WEC round.

A spokesman for Toyota Motorsport GmbH said: "It is our home race and a circuit that Toyota owns, and it is right next to our R&D facility where the hybrid systems and the engine for the TS030 are developed.

"As a Japanese company it is important that we put on a good show for our Japanese fans and get a good result, which could be important for the future of the programme."

It is unlikely that Toyota will run a second car after the Japanese event on October 20 at either of the final two rounds of the WEC in China or Bahrain.

Toyota filed a pair of full-season entries for the WEC at the behest of the series organiser, although it only intended to enter two TS030s at Silverstone, Spa, the Le Mans 24 Hours and, most likely, Fuji.

It downscaled to one car for Interlagos and gave the wheel to Davidson, Sarrazin and Buemi for the Brazilian race and the Austin round because they were best placed in the championship. 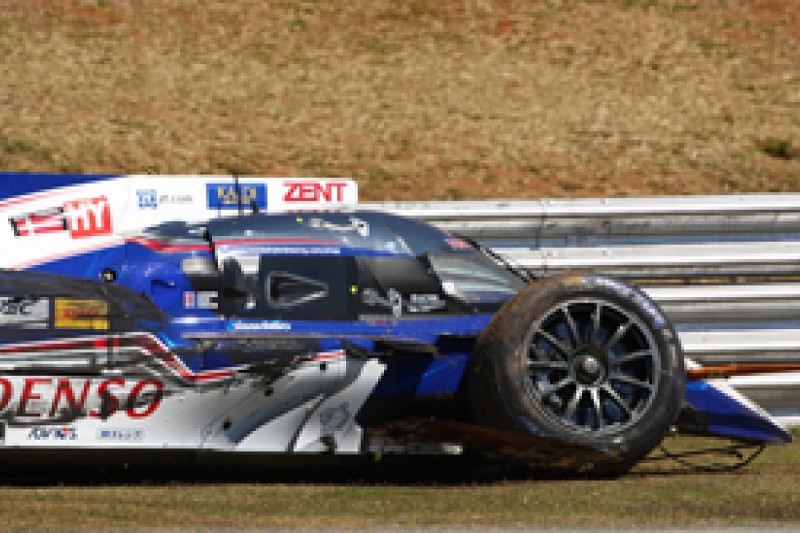 They are only likely to remain in the car for the November events at the Shanghai and Sakhir circuits if they retain a mathematical chance of winning the title.

Toyota non-scored at Interlagos after Sarrazin was taken off by an LMP2 car (pictured).

The monocoque of the TS030 was damaged in the accident and the car was rebuilt around the team's spare tub in Brazil before its shipment to the US.