Toyota started its first-ever race with the all-new GR010 Hybrid on the front foot by qualifying both cars on the front row, but its narrow pace advantage over the #36 Alpine A480-Gibson - the grandfathered LMP1 car its only rival in the Hypercar class - meant the Japanese giant needed a relatively smooth race to secure victory.

That didn't happen however, with polesitter Kobayashi throwing away the lead in the second half of the race by going off the track at Bruxelles in the #7 car, losing a lap in the process.

The #8 car of Nakajima, Buemi and Hartley also had its issues, notably receiving a 30-second time penalty for an early pitstop infraction after the Toyota crew took the refuelling hose off the car six seconds short of the required 35 second minimum time.

That gave Alpine trio Nicolas Lapierre, Andre Negrao and Matthieu Vaxiviere a fighting chance to take victory as it traded the lead with the #8 Toyota depending on the pitstop sequence. But it ultimately couldn't live with the #8 Toyota's race pace.

Buemi crossed the line with a 1m07s gap on Negrao, who was further held back by a late puncture.

The #7 Toyota took on the lion's share of the Cologne team's teething issues with its all-new Hypercar, losing time with a slow pitstop early on and having to do a full system reset during a late full-course yellow. Kobayashi ultimately took the flag third, one minute clear of the leading LMP2 car.

In LMP2 United Autosports, produced another crushing display with its #22 ORECA 07-Gibson.

Phil Hanson, polesitter Filipe Albuquerque and newcomer Fabio Scherer led from start to finish and amassed a healthy one-minute lead, with only a late drive-through penalty for a full-course yellow violation able to dent their dominant lead. 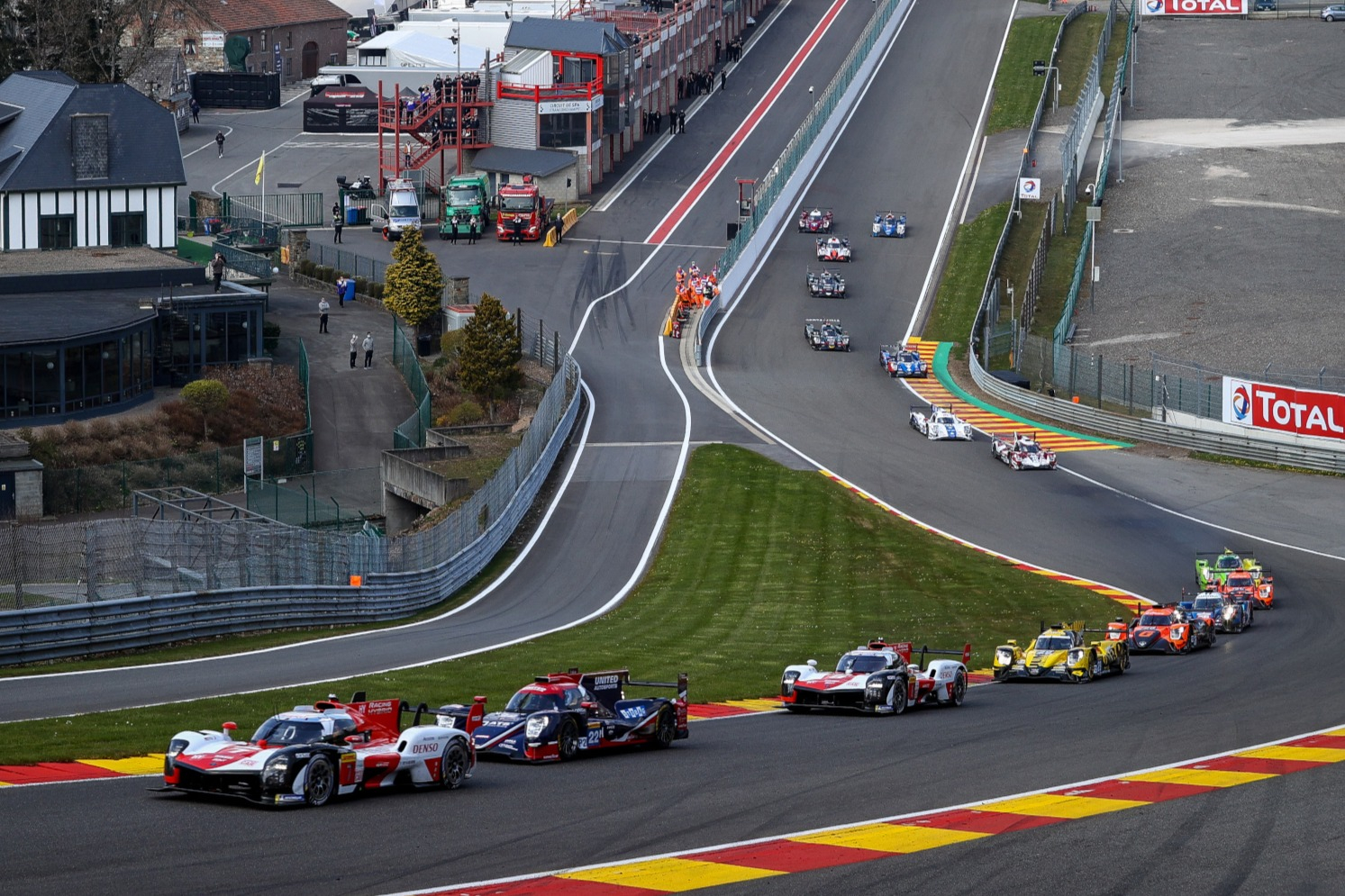 Toyota #7 leads at the start

The #26 G-Drive Aurus-badged ORECA driven by Roman Rusinov, Franco Colapinto and Nyck de Vries looked set for second place after being driven to the front by De Vries, but the team was forced to retire with an oil leak in the fifth hour.

That promoted the #28 Jota ORECA of Stoffel Vandoorne, Sean Gelael and Tom Blomqvist to second, but a drive-through handed to Blomqvist for making contact with the Alpine at Eau Rouge handed second to the #38 sister car of Antonio Felix da Costa, Roberto Gonzalez and Anthony Davidson.

The #38 Jota trio finished 44 seconds behind the winners, with the #28 car a further minute in arrears.

Early LMP2 Pro-Am frontrunner DragonSpeed was hampered by a drive-through for Juan Pablo Montoya - following contact with Rusinov on the approach to Pouhon that resulted in GTE Am polesitter Ben Keating having a spin - and lost further time to finish seventh in class and third in Pro-Am, behind RealTeam Racing trio Loic Duval, Norman Nato and Esteban Garcia.

Series debutant Team WRT also fell away from the front due to a clutch issue, but the Belgian squad's ORECA also looked competitive in the hands of Robin Frijns, Ferdinand Habsburg and Charles Milesi.

In a five-car GTE Pro class, the #92 Porsche 911 RSR-19 of Kevin Estre and Neel Jani proved the pick of the field.

Picking up where he left off after his stunning pole on Friday, Estre continued to dominate the field during the opening stages of the race, with only a puncture being able to worry the Porsche factory team. 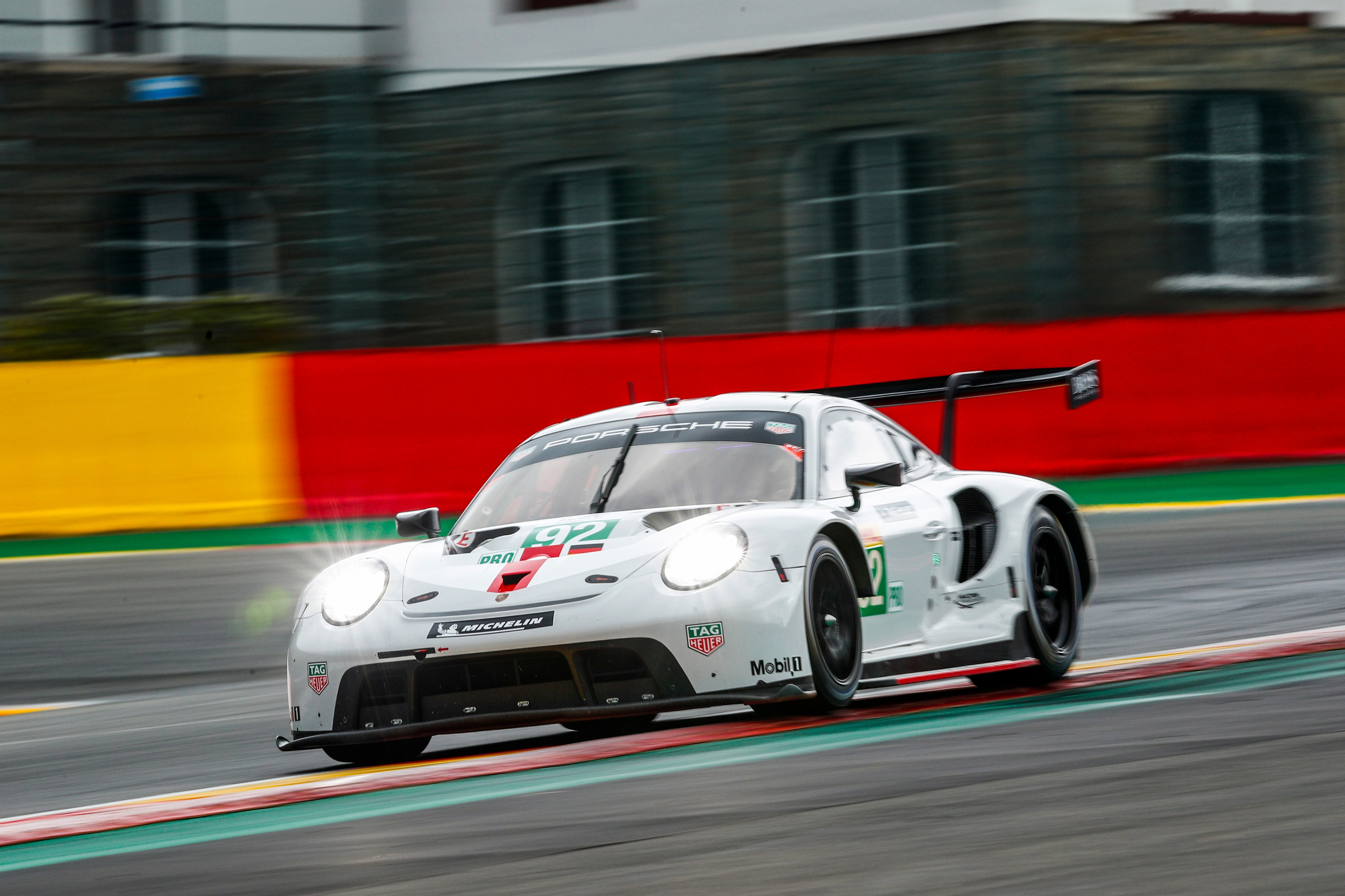 Estre and GTE debutant Jani took the win 25 seconds ahead of the first of the AF Corse Ferraris, the #51 488 GTE Evo of James Calado and Alessandro Pier Guidi.

The #52 sister car of Miguel Molina and Daniel Serra, another car hit with a drive-through for full-course yellow infractions, completed the podium 1m38s behind.

Chevrolet finished a distant fourth on its first outing outside North America with the C8.R, one lap behind the class leaders. Antonio Garcia shared the #63 machine with Oliver Gavin, who made his final appearance as a professional racer after a glittering career that includes five Le Mans wins for Corvette.

The second Porsche, the #91 of Gianmaria Bruni and Richard Lietz, finished last in class after suffering two right-rear punctures and being punted off by the #7 Toyota.

The #83 AF Corse Ferrari dominated the GTE Am class. After being established at the forefront by Francois Perrodo, Italian GT champion Alessio Rovera underlined his credentials by sprinting away from the field.

Nicklas Nielsen finished the job, crossing the line with a 1m08s lead on the #33 TF Sport Aston Martin shared by Keating, Felipe Fraga and Dylan Pereira.

The #88 Dempsey Proton Porsche of Alessio Picariello, Marco Seefried and Andrew Haryanto look set to finish third, but it too was hit with a FCY related 30-second penalty and was demoted to fifth.

That promoted the #47 Cetilar Ferrari of Roberto Lacorte, Giorgio Sernagiotto and Antonio Fuoco to third in class.

Full highlights of the WEC 6 Hours of Spa are available on Motorsport.tv. The FIA World Endurance Championship heads to Portugal next month for June 13's 8 Hours of Portimao.