Sebastien Buemi began the hour in the #8 car by reeling in race leader Kamui Kobayashi, getting within half a second of the #7 before he stopped and Kobayashi later handed the #7 over to Mike Conway.

Buemi then fell more than a minute back in the #8, which Toyota attributed to time lost in a slow zone, before clawing back time when it ended while Conway was in the middle of it.

The pace of the two cars then settled down in the final quarter of an hour, with Conway ending the hour with half a minute in hand.

The #3 Rebellion now sits in a clear third place after its main rival, the #17 SMP Racing entry, stopped at the end of the previous hour as a result of Matevos Isaakyan's crash at the Porsche Curves.

Isaakyan attempted to restart the BR1 twice at the scene of his accident, either side of the car being retrieved by a crane, but a second failed attempt to get going led to the brief implementation of a slow zone.

The engine cover was removed after the car was retrieved for a second time, but although Isaakyan made a third attempt to return to the pits he was forced to jump from his car when it caught fire - which in turn caused another slow zone.

Laurent's hour was not trouble-free - he spent five minutes in the pits during one visit with a clutch sensor issue - but the #3 Rebellion-Gibson R-13 still has a healthy advantage of 3m18s over the sister #1 car.

Both Manor-Ginettas ended the hour in the garage, although Ginetta said the two issues were unrelated.

G-Drive in control in LMP2

Andrea Pizzitola is back behind the wheel of the race-leading #26 G-Drive Racing ORECA after a triple stint from Jean-Eric Vergne consolidated the lead it has held since the first hour.

Vergne continued to extend the gap to the chasing Signatech-Alpine of Andre Negrao to the tune of around 20 seconds, despite being on Dunlops that had done three stints by the time he handed over to Pizzitola on lap 131.

The gap stood at 2m43s when Pizzitola rejoined, although Negrao has largely matched Pizzitola on slightly older rubber and was 2m44s behind at the hour mark on lap 137.

Will Stevens (Panis-Barthez Competition Ligier) and Paul Lafargue (IDEC Sport ORECA) also pitted on lap 131, but Lafargue - who has made one stop more than the cars around him - is regularly lapping slower than Stevens and recently slipped off the lead lap.

Vincent Capillaire continues to hold fifth position in the #39 Graff-So24 Racing ORECA, but is being caught by Loic Duval, who is back aboard the #28 TDS Racing ORECA for the first time since his opening quadruple stint.

The #34 Jackie Chan DC Racing Ligier with Ricky Taylor at the wheel is the first car two laps down in seventh position. 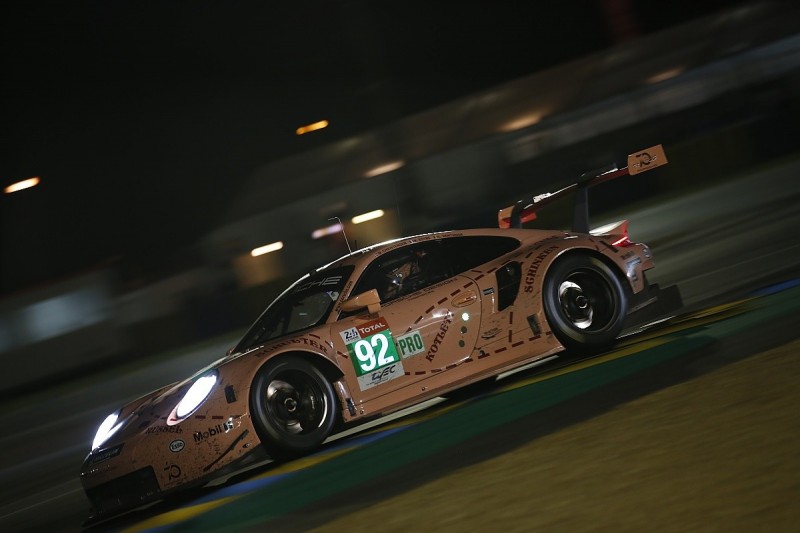 The leading Porsche in the GTE Pro class had its advantage reduced significantly in the ninth hour, but still leads by more than a minute.

Laurens Vanthoor held a buffer of more than two minutes in the #92 Porsche, but lost around 40 seconds of that advantage due to being caught out by the slow zone.

As the clock hit midnight local time, Vanthoor was ahead of the sister #91 Manthey-run Porsche driven by Frederick Makowiecki by 1m19s.

The third-placed #93 Porsche was forced into the garage with an electrical problem towards the end of the ninth hour, dropping it outside of the top 10.

That issue promoted Philipp Eng in the lead BMW M8 GTE to third, the Austrian running just a couple of seconds behind Makowiecki.

Sebastien Bourdais in the leading Ford GT was fourth, another 55 seconds down, followed by Pipo Derani in the best-placed of the Ferrari 488 GTEs.

Attrition elsewhere has moved Aston Martin into the top 10 in class for the first time, with Darren Turner running one lap down in the #95 Vantage.

GTE Am is still being led by the #77 Dempsey-Proton Porsche, with Julien Andlauer running 32 seconds clear of Cooper MacNeil (taking over from Jeff Segal) in the #84 Ferrari.

Giorgio Roda runs third in the second of the Dempsey-Proton cars a similar margin behind.