Mark Webber, Timo Bernhard and Brendon Hartley dominated the Shanghai round of the World Endurance Championship to seal a second consecutive manufacturers' crown for Porsche

The reigning world champions' 919 Hybrid led from halfway around the opening lap and was in control of the race from the beginning on the way to a 59-second victory.

Hartley was able to pull a gap on the chasing pack during his opening double stint and then Bernhard was able to extend the advantage over team-mate Marc Lieb during the third stint.

Toyota maintained its faint hopes of winning the drivers' crown with second place for Kamui Kobayashi, Stephane Sarrazin and Mike Conway, despite twice being delayed by a slow puncture.

They were back ahead of the Porsche of Lieb, Dumas and Neel Jani before the final round of pitstops.

Both Toyota TS050 HYBRIDs double-stinted their tyres through a second short stint at the end, which allowed Sebastien Buemi, Anthony Davidson and Kazuki Nakajima to jump ahead of the second Porsche.

Hartley said: "It wasn't an easy race; the first stint I was pushing hard to try to make a gap.

"It was a tricky race tactically and if the #6 Toyota hadn't had its punctures, I would have been a lot hotter at the end." 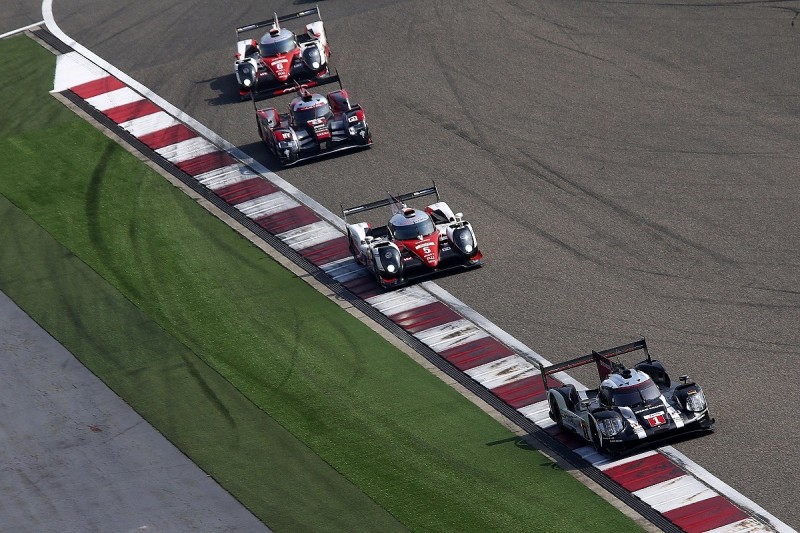 Audi had a disastrous race at the first WEC round since the announcement of its withdrawal from the prototype ranks.

Loic Duval, Lucas di Grassi and Olivier Jarvis were unable to keep their faint hopes of the title alive with a distant fifth place.

Di Grassi ran second for all but the first three laps of the opening couple of stints, but a refuelling problem at the first round of pitstops when the car failed to get a full load of fuel resulted in an early second stop.

The car lost time refueling at every subsequent stop and was three laps down at the finish in fifth.

Treluyer and co-drivers Andre Lotterer and Marcel Fassler were never in the hunt and lost time in the garage on the way to sixth after a clash with team-mate Jarvis.

G-Drive Racing dominated LMP2 on the way to a second victory of the season for Will Stevens, Alex Brundle and Roman Rusinov aboard its Jota-run ORECA-Nissan 05.

They finished a lap up on the Extreme Speed Motorsport Ligier-Nissan JSP2 of Tom Blomqvist, Antonio Giovinazzi and Sean Gelael.

Fourth place for Signatech Alpine trio Nicolas Lapierre, Stephane Richelmi and Gustavo Menezes was enough to give them the P2 crown even though they finished behind closest rivals Bruno Senna, Filipe Albuquerque and Ricardo Gonzales in the RGR Sport Ligier.

Andy Priaulx and Harry Tincknell again took honours in front of Stefan Mucke and Olivier Pla, whose Ford GT was delayed by a slow puncture.