Double Formula 1 world champion Fernando Alonso made a seven-tenth improvement during the second half of his Bahrain test in a Toyota LMP1 car, where he clocked up 113 laps

The Spaniard, driving an LMP1 machine for the first time, posted a best time of 1m43.013s during the three-hour afternoon period of the World Endurance Championship rookie test aboard the #8 Toyota TS050 HYBRID.

That compared with the 1m43.709s he set during the two-hour morning session.

Alonso's fastest lap of the day compared with the 1m42.381s set by Toyota regular Mike Conway aboard the #7 car in the afternoon.

The McLaren F1 driver, who has targeted a Le Mans 24 Hours win as part of his bid to clinch the unofficial triple crown of motorsport, joined Conway in a Michelin tyre test during the afternoon.

Toyota Motorsport GmbH technical director Pascal Vasselon stressed that Alonso did not go for a quick time at any point during the day.

"After getting more familiar with the car this afternoon he did some tyre testing, complementing what Mike [Conway] has been doing in the other car."

Alonso, who is currently 15th in the 2017 F1 drivers' points standings, described the test with Toyota as "a great day".

"I think a test in an LMP1 is always a nice thing for any racing driver; these cars are amazing to drive and are very consistent in the stints," he added.

But he refused to be drawn on the likelihood of him joining Toyota for Le Mans next year.

"One day it would be nice [to race in endurance]," he said.

"I don't know when, but endurance is one of the goals for me in the future after F1." 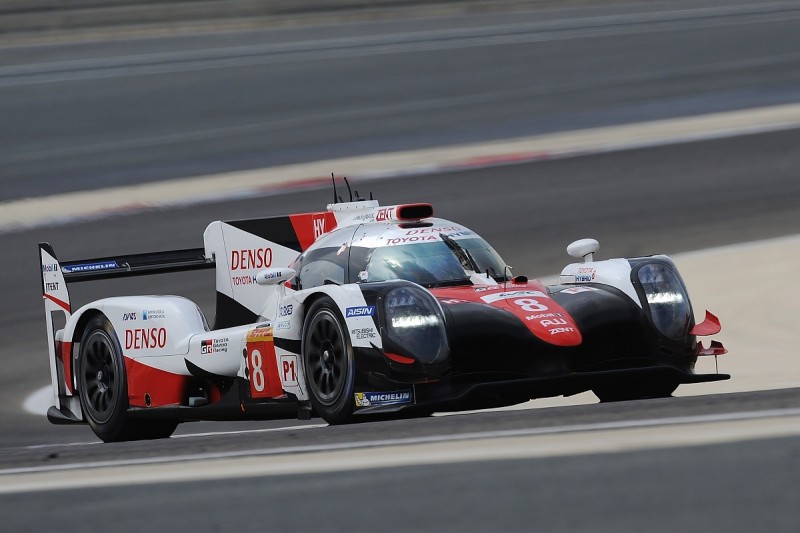 Vasselon also refused on to comment on the chances of Alonso rejoining Toyota for its next scheduled test at Aragon at the start of December.

"At the moment it was just a fantastic opportunity," he said.

"We have time now to think about the future."

Pietro Fittipaldi, who was given a test in a Porsche 919 Hybrid as a reward for winning the Formula V8 3.5 title over the Bahrain WEC weekend, also improved his times over the day.

The grandson of Emerson Fittipaldi got down to a 1m42.275s during a short run in the afternoon, knocking more than a second off his morning best.

The Russian improved by nearly half a second on his morning best to get down to a 1m48.444s.

Nick Tandy and Earl Bamber tested for the factory Porsche GTE Pro squad in the afternoon the day after their final outings in a 919 Hybrid LMP1 car.