Porsche drivers Kevin Estre and Michael Christensen have been reinstated on the GTE Pro pole for Saturday's Spa round of the World Endurance Championship.

The reigning class world champions lost pole position when Estre had his lap deleted for a track limits violation at the La Source hairpin.

This has now been rescinded after a review of video evidence by the stewards following a report from the race director.

Estre only completed one flying lap because the 2m14.191s easily cemented pole for the #92 factory Porsche 911 RSR and was therefore left without a time after the penalty.

This relegated the car to the back of the grid.

The Aston Martin Vantage GTE of Maxime Martin and Alex Lynn that was promoted to the top of the class order has now been pushed back to second.

Estre and Christensen were separated by just three hundredths, the Dane posting a 2m14.223s.

That gave them a 2m14.207s average, which was four tenths up on that of Martin and Lynn.

Estre said in the wake of qualifying on Friday evening: "My lap was perfect, but now I'm surprised that they say I veered off the track in a corner.

"Personally, I'm convinced that I drove within the track limits at all times on my fast lap." 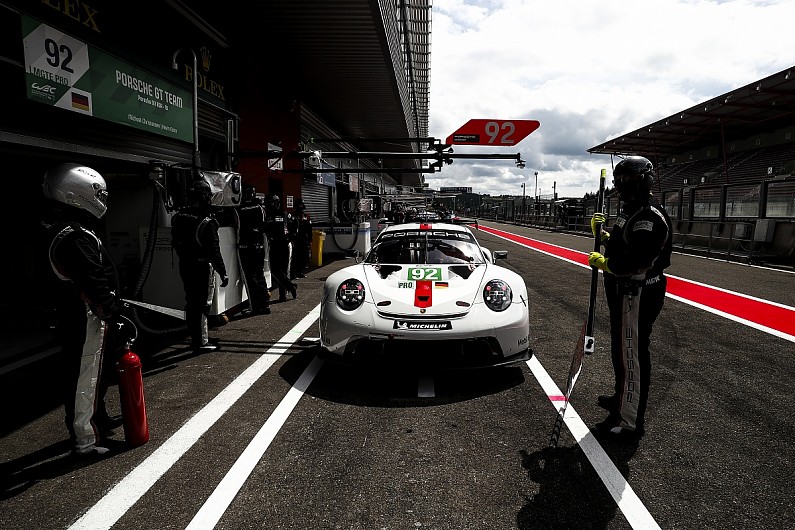 He added that he was "feeling confident that we can still achieve a top result" despite starting from the back of the grid.

Lynn said that Aston was still expecting a challenge from Estre and Christensen during the race.

"We'll enjoy it for a night, but they are so fast — they will come again," he said.

A deleted lap time for the second Porsche with Gianmaria Bruni at the wheel was also reinstated after the same review process.

This had no bearing on the order of the GTE Pro grid.

GTE Am drivers Matteo Cairoli and Salih Yoluc, in the #56 Project 1 Porsche and the TF Sport Aston respectively, were given back deleted times, also without affecting the class order.