Kamui Kobayashi, Mike Conway and Jose Maria Lopez extended their lead in the World Endurance Championship with victory at Spa on a day that Toyota dominated

The drivers of the #7 Toyota TS050 HYBRID came home 34 seconds ahead of the sister car shared by Sebastien Buemi, Brendon Hartley and Kazuki Nakajima at the end of a race in which the Japanese manufacturer was never challenged.

The pole-winning Rebellion-Gibson R-13 entry, which had topped every session ahead of the race, wasn't a factor on the way to a distant third place in the hands of Bruno Senna, Gustavo Menezes and Norman Nato.

Kobayashi, Conway and Lopez overcame a penalty under the system of LMP1 success handicaps of 3.52s, nearly half a second more than the sister car.

The race began under the safety car after a rain storm half an hour before the start and both Toyotas were able to accelerate past the Rebellion after Nato went wide at La Source when the race went green at the start of lap four.

The #8 Toyota had a clear edge at this stage, Buemi storming into a lead of more than 10s ahead of Conway in the space of four laps before an electrical glitch cost the Swiss half his advantage.

Buemi stayed on wet tyres at the first round of pitstops, while Conway was given slicks a lap later.

When the #8 car had to come back in after the safety car that followed immediately after their pitstops, the initiative was handed to the #7 Toyota.

A lead of more than a minute for Kobayashi disappeared with the third safety car of the race late in the third hour.

The two Toyotas exited the pits together but Hartley failed to pick up speed as the earlier electrical glitch returned and he lost 40 seconds.

The Toyota was, for reasons unknown to the team, going into a safety or protective mode automatically.

A fourth and final safety car of the race that came out when Thomas Laurent's Signatec Alpine LMP2 car went off heavily at Turn 16 late in the penultimate hour closed the two Toyotas up again.

The gap between Lopez and Nakajima that had stood at 35s had come down to 3.8s when the race went green.

Nakajima reduced that gap to just over a second before the two cars pitted time with just under 40 minutes to go, at which point the positions were frozen per Toyota's usual rules of engagement.

The gap was approximately 10s when Buemi bought the #8 car in for a splash-and-dash fuel stop two laps before the chequered flag.

The Rebellion struggled over the course of a race that was wet for much of the first four hours. 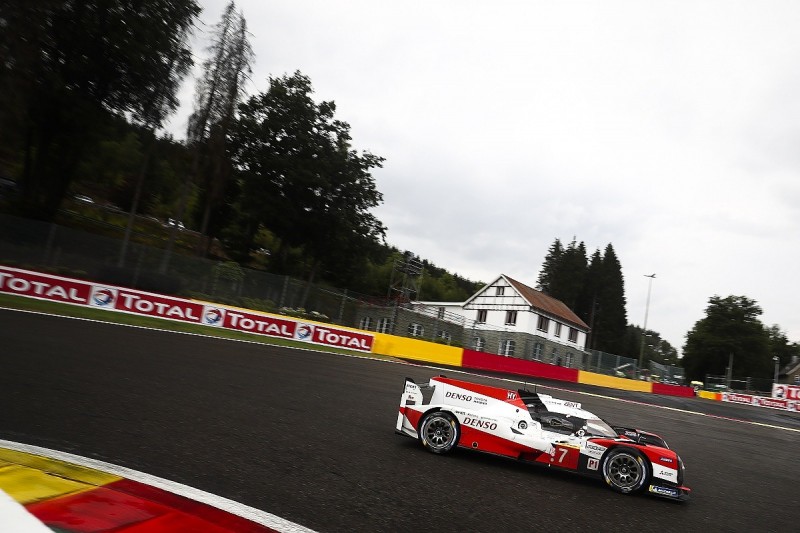 Nato dropped behind the ByKolles ENSO CLM-Gibson P1/01 a couple of laps after the race went green as he struggled on his first set of Michelin wets.

The Frenchman was the first of the LMP1 field to stop, switching to a new set of wets on lap 16, which turned out to be the wrong call.

He was back in the pits for slicks shortly before the safety car returned to the track, which put him down in sixth position behind the LMP2 class leaders.

The Rebellion was a full lap down by the time the conditions finally improved and was never able to get back on terms with the Toyotas.

The ByKolles P1 entry shared by Tom Dillmann, Bruno Spengler and Oliver Webb ran third behind the Toyotas until a slow stop in the third hour.

A prolonged stop in the final hour dropped the car to the back of the field.

The Anglo-American team battled with the Racing Team Nederland ORECA driven first by Giedo van der Garde and then Job van Uitert for the first four hours of the race.

United then briefly lost the class lead to the Signatech Alpine entry when Hanson had to cut his pace to save fuel. 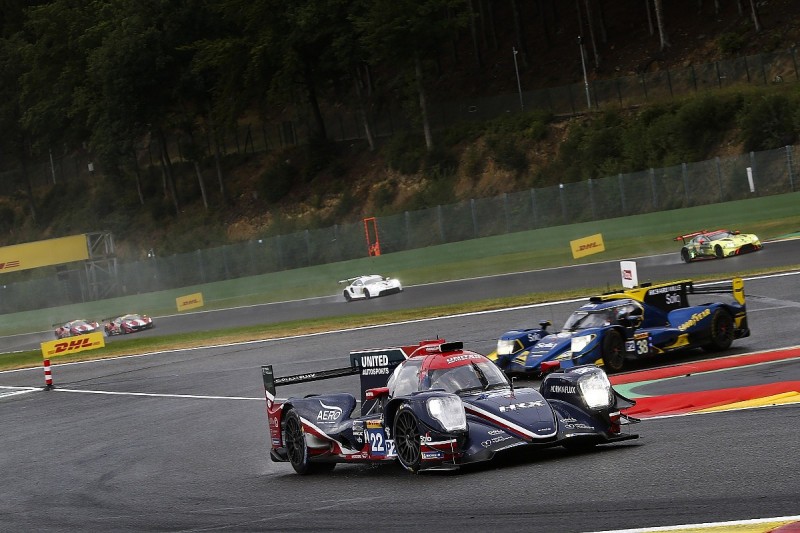 Di Resta had got the car back in the lead and was running a couple of seconds ahead of the French entry when Laurent was tagged by Fritz van Eerd in the RTN car at the fast lefthand kink before Blanchimont.

The Alpine-badged ORECA hit the barriers hard, but Laurent was able to walk away from the wreck.

Nicolas Lapierre hauled the Cool Racing ORECA he shares with up Antonin Borga and Alexandre Coigny into second in P2 in the final hour.

Porsche duo Kevin Estre and Michael Christensen triumphed in GTE Pro after a topsy-turvy race in which all three manufacturers appeared to be in the ascendancy as the conditions changed.

They came out on top in a late-race battle with the two Aston Martins, ending up five seconds ahead of the Vantage GTE shared by Nicki Thiim and Marco Sorensen at the conclusion of the six hours.

Estre had been the filling in an Aston sandwich after the final safety car, with Maxime Martin ahead of him and Sorensen behind.

The Porsche 911 RSR got ahead of the Vantage Martin shared with Alex Lynn with 20 minutes to go, at which point Sorensen was three or so seconds down as he conserved fuel.

Martin needed to make a splash-and-dash fuel stop with four minutes to go, but was able get out ahead of James Calado's AF Corse Ferrari.

The 488 GTE Evo the Briton shared with Alessandro Pier Guidi was a competitive proposition in the wet conditions and led the race for prolonged periods in the Italian's hands.

But the Ferrari was no match for the Porsche or the Aston in dry conditions, though Calado was able to hold off Gianmaria Bruni in the second Porsche over the closing stages.

The AF Corse Ferrari shared by Nicklas Nielsen, Emmanuel Collard and Francois Perrodo claimed GTE Am honours ahead of the Dempsey-Proton Porsche of Matt Campbell, Christian Ried and Riccardo Pera.