Marc Lieb snatched pole position for Porsche ahead of Saturday's Spa round of the World Endurance Championship in a frenetic session held on a drying track.

Lieb, who shared qualifying duties in the #14 Porsche 919 Hybrid with Neel Jani, put in two quick laps at the end of the 30-minute session to lower the car's four-lap average and jump to the top of the times ahead of the Toyota TS040 HYBRID driven by Sebastien Buemi and Anthony Davidson.

Lieb had gone out first on intermediate tyres prior to Jani taking over on slicks as the track dried.

Jani put the car second on the timesheets behind the Toyota before all the factory LMP1s returned to the pits to switch back to their first driver in an attempt to bring down their qualifying average.

Two laps in the 2m01s bracket from Lieb gave Porsche pole position at the second time of asking on its return to top-flight sportscar racing.

Lieb, who has graduated to the LMP1 squad from Porsche's GT ranks, said: "I was drinking a coffee in the back of the garage when I was told to put my helmet back on and get back in the car.

"I was quite tough: I got a really good out-lap so I could get the two timed laps in.

"The past year has been quite dramatic. We have built a brand new team and done so many test kilometres, so to get the first pole position is really cool."

Lieb and Jani ended up with a 2m01.198s average, which was just over six tenths better than that of Buemi and Davidson.

Andre Lotterer and Marcel Fassler ended up third in the best of the Audi R18 e-tron quattros with an average a further seven tenths adrift.

They looked to have secured the class pole before the SMP Racing ORECA-Nissan shared by Nicolas Minassian and Maurizio Mediani jumped to the top of the times after waiting in the pits until the conditions improved.

Bradley was put back in the car and managed one flying lap good enough to snatch pole back by six tenths. 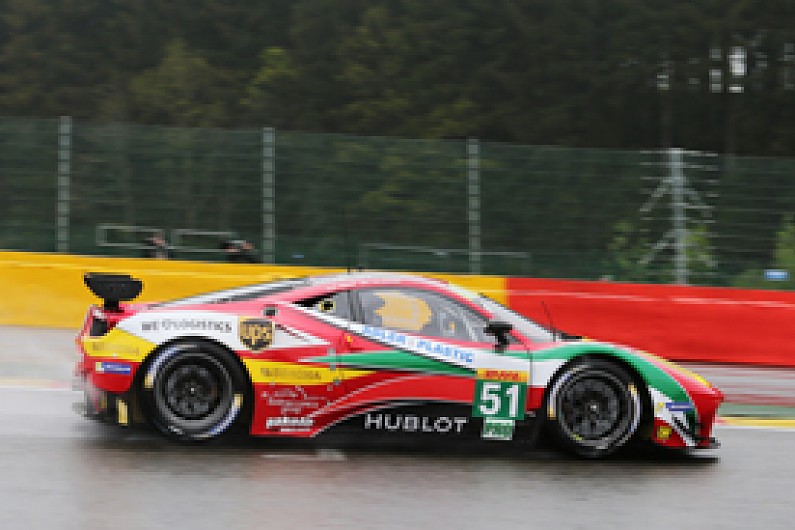 Vilander had been only fourth in the Pro classification after the first runs in the wetter GTE session, but crucially made the call to send his team-mate back out on scrubbed wets.

A pair of 2m30s laps from Bruni gave their 458 Italia a 2m33.338s average to jump ahead of the factory Manthey Porsche 911 RSR shared by Marco Holzer and Frederic Makowiecki.

Darren Turner also improved his and Aston Martin team-mate Stefan Mucke's average after the chequered flag had come out to further demote the Porsche to third.

GTE Am honours went to the AF Corse Ferrari shared by Marco Cioci and Mirko Venturi with an average a couple of tenths up on the Porsche 911 GT3-RSR of Emmanuel Collard and Matthieu Vaxiviere.