Chris Dyson beached the Dyson Lola in spectacular fashion when he locked up braking hard for the Turn 10 chicane, bringing out the red flags.

The stoppage meant a five-minute shootout for pole and though Lucas Luhr improved to a 1m10.397s for the champion Pickett HPD squad, Jani lowered his benchmark further, claiming pole with an eventual best of 1m09.254s.

Ryan Briscoe headed the fight for LMP2 pole before the red flag in the #551 Level 5 car but David Brabham, driving the #01 Extreme Speed entry, snatched it with a stunning effort after the stoppage.

Having got ahead of Briscoe, who briefly rallied and regained top spot with a 1m12.490s - as Guy Cosmo slotted into third, Brabham surged back onto pole as Briscoe suffered an apparent fuel pick-up problem in the session's climax and broke down on circuit.

Dane Cameron looked as though he would have to settle for second after being usurped from top spot in LMPC by Bruno Junqueira.

But the Mathiasen driver squeezed back ahead of his returning rival before extending his advantage with the second of two laps good enough for pole.

Junqueira responded in the wrong way, skating over the Turn 5 gravel and nerfing the tyre wall right at the end of the session. Briton Tom Kimber-Smith nipped ahead of Kyle Marcelli to claim third.

Matteo Malucelli's Risi Ferrari 458 Italia claimed GT honours in a tight qualifying session in which the top seven cars were covered by just over half a second.

Each of the five manufacturers represented in the series was in the early lead quintet, though the SRT Vipers swiftly put an end to that with Jonathan Bomarito emerged as the main challenger to Malucelli's 1m18.861s benchmark and closed the gap to 0.027 seconds. 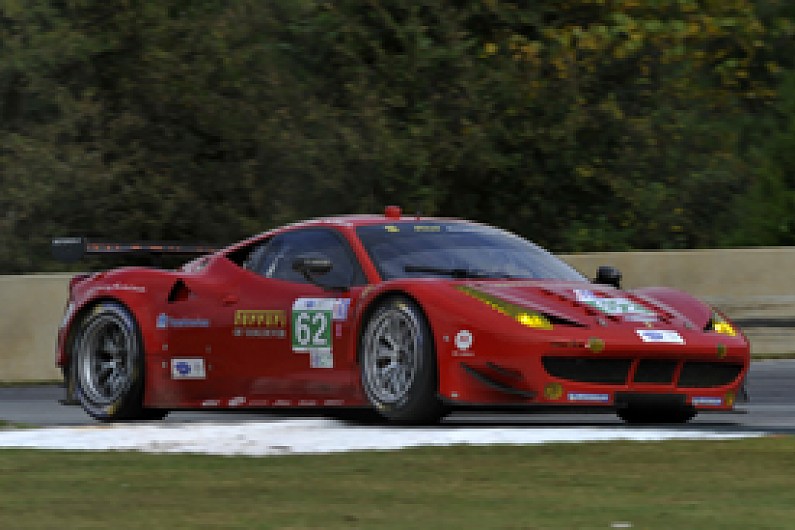 Despite the Ferrari driver returning to the pits with five minutes remaining, Bomarito could not improve further.

Marc Goossens brought the second Viper into play in the closing stages of the session - just edging out Antonia Garcia in the first of the Corvettes in the process - but fell a tenth short of his team-mate.

Dirk Muller (RLL) and Bryan Sellers (Falken) were the lead BMW and Porsche cars respectively in fifth and sixth, just ahead of Oliver Gavin in the second Corvette.

In GTC, Spencer Pumpelly led the session's early running with a benchmark of 1m24.118s set in the opening stages of the session.

Andy Lally and Jeroen Bleekemolen gave chase and although the latter found enough time to haul him into second, he could do nothing about Pumpelly in front.