Conway has signed up for a full season aboard the G-Drive Racing-entered ORECA-Nissan 03 to be run by Silverstone-based Delta-ADR, while Pizzonia has agreed terms to start the WEC in Delta-ADR's own entry.

The 29-year-old Briton, whose only confirmed IndyCar drive for the coming season is with the Rahal squad in Long Beach in April, will share the G-Drive entry with Russian Roman Rusinov, who raced the car last year when it was run by Signatech, and Delta-ADR regular John Martin.

Pizzonia will drive alongside Tor Graves, who was also part of the line-up that took Delta-ADR to second place in the LMP2 teams' standings in last year's WEC, and a yet-to-be-confirmed third driver.

Delta-ADR team manager Simon Dowson, whose squad has Nissan partner team status in 2013, said: "Our objective was always to have the strongest line-up possible as we attempt to go one better than last year and with the support of G-Drive we are well on the way to doing that across two cars."

"That made getting a deal in IndyCars quite difficult," he said. "Sportscar racing was something that had been in his mind for a while and it is definitely the right time to step into this kind of racing, which is on the up again."

Blundell stressed that Conway was not drawing a line under his single-seater career.

"It is not out of the question that Mike could end up doing some more IndyCar races, probably on the street courses," he said.

"He proved his undoubted speed again when he was the fastest Honda runner at Barber [Motorsports Park] earlier this month." 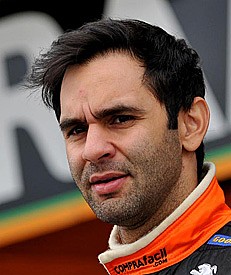 Conway is due to get his first taste of the G-Drive ORECA-Nissan at the official WEC test at Paul Ricard, starting on Friday.

His only previous sportscar experience came at the wheel of the HVM Status team's Lola-Judd/BMW B12/80 at the Algarve circuit late last month.

Dowson explained that the intention was for Pizzonia, who is currently only confirmed for next month's Silverstone series opener, to complete the season alongside Graves.

"We are working hard to keep Antonio in the car for the season," he said, "although there is a little way to go yet."