Polesitter Cam Waters led across the first stint of the second race of the weekend, although it was never a comfortable lead.

From the word go, he had Whincup under his rear wing, while van Gisbergen joined the battle for the lead at the lap 10 mark after making good early progress from sixth on the grid.

Waters opted for an early stop on lap 13 of 44, Whincup almost following him into the lane before making a last-second decision to stay out and take over the lead.

He kept van Gisbergen at arm's length for the next six laps before serving his stop, re-emerging back behind Waters, who had benefited from the undercut.

The benefit was shortlived, though, Tickford's ongoing tyre degradation issues leaving Waters as a sitting duck.

On lap 26, Whincup got his nose under Waters at the hairpin, the pair knocking doors as they drag raced down the back straight before Whincup eased into the lead at Turn 6.

From there, he just had to manage the gap back to van Gisbergen, Whincup successfully snapping his team-mate's seven-race winning streak with a first victory since Townsville last season.

"It's a good feeling to get the win," said Whincup. "[Shane] has had a shocker, he's finished second.

"The car was great. I didn't quite get the start I would have liked, but we had slightly better tyre life than Cam. SVG was coming at the end but I just had enough to hang on."

Van Gisbergen had an action-packed run through to second, having dropped back to fourth on the road after taking a late stop on lap 27.

That meant he had to get past Will Davison and Waters, van Gisbergen using the hairpin on both occasions to dive under his rivals.

The pass on Waters was particularly aggressive, van Gisbergen making a late dive before running Waters nice and high at the apex.

That opened the door for Davison to follow van Gisbergen through, before charging to the podium.

Waters finished fourth ahead of impressive rookie Will Brown, while Mostert made decent progress from 10th on the grid to finish sixth. 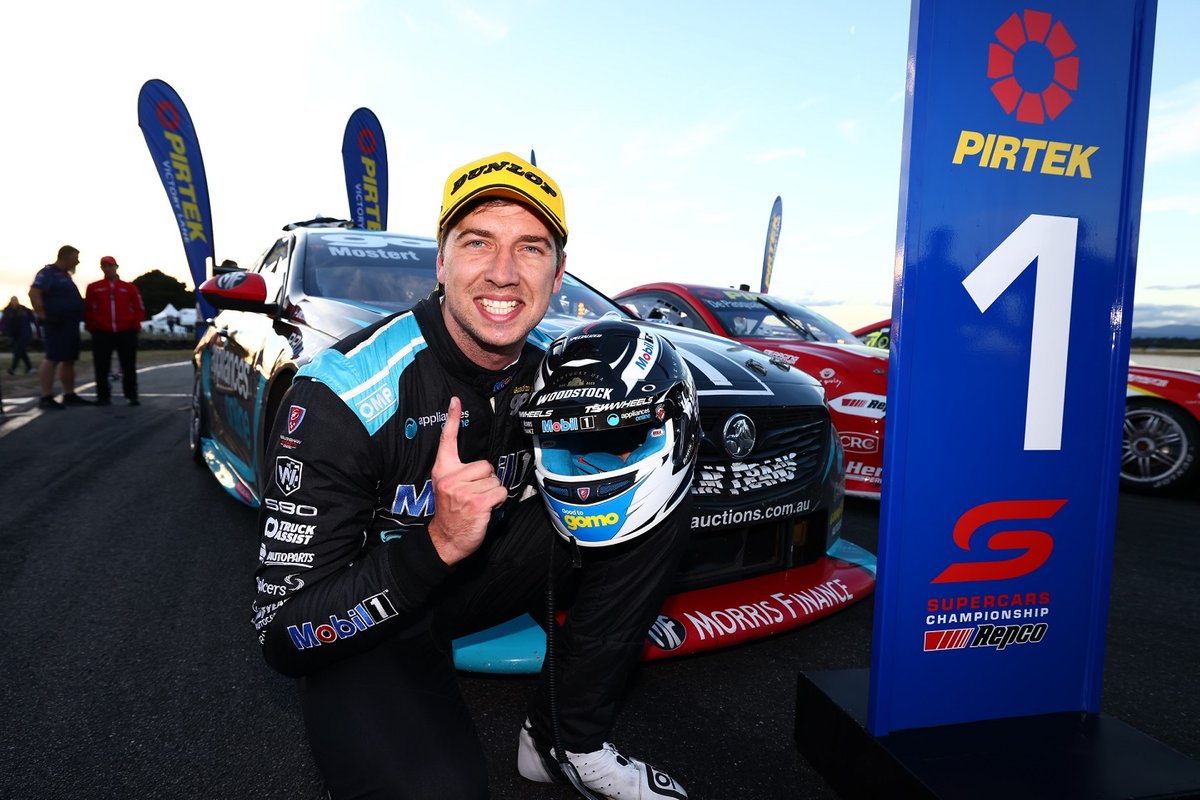 Mostert's final race of the weekend was even better as the former Ford star took his maiden win in a Holden in dominant fashion, the final margin over the field a healthy 10 seconds.

He set the victory up with a brilliant start from the outside of the front row that helped him vault clear of Waters well before Turn 1.

He couldn't quite shake Waters across the first stint, the gap between the former team-mates hovering around the half-second mark.

However, the cycle of stops worked in Mostert's favour, his lap 13 service coming later than the rest of the frontrunners, but leaving him more than a second clear of Waters and the chasing field.

Once in the effective lead, Mostert was unstoppable, quickly extending the margin as Waters fell away in the second stint.

"It's been a long time for a first place in Supercars, I was starting to believe I couldn't do it," said Mostert.

"I'm super stoked for the team. We were there or thereabouts with pace all weekend but that car in the last race was a lot of fun in clean air. I'm so happy to finally get that monkey off our back."

For the third time this weekend, Waters couldn't convert his early speed across the race distance, although he did hold on longer than usual this time around.

He managed to cling on to second, albeit with four cars parked under his Mustang's wing, until two laps from the end.

He was then passed by Dick Johnson Racing pair Anton De Pasquale and Davison on consecutive laps as he slipped back to fourth.

Triple Eight drivers Whincup and van Gisbergen, who had shared every win of the season until this race, were part of that frantic battle for second in the closing stages.

They traded places twice in that final stint, Whincup seemingly letting van Gisbergen through to have a crack at the cars in front before they reversed their order again on the last lap.

The fifth place helped Whincup to the round win, although the gap to leader van Gisbergen in the standings is still a hefty 139 points.