Shane van Gisbergen held off Will Davison to win a tense final heat of the Sandown SuperSprint, to double up on his victory in Race 2 earlier in the day.

The final race got off to a wild start as van Gisbergen and Davison battled for the lead of the race.

Starting from pole, Davison was under fire from van Gisbergen from the word go. On just the second lap the Kiwi got next to the Shell Ford up the back straight, Davison only retaining the lead as he had the racing line into Dandenong Road.

Van Gisbergen then crept up the inside of Davison at the last corner, Davison copping team-mate Anton De Pasquale up his rear-left guard as he was baulked.

The subsequent damage took De Pasquale out of contention, however Davison was able to continue in second with nothing more than a rubbing rear guard.

He almost got a crack at reclaiming the lead on the very next lap when van Gisbergen ran slightly wide at Turn 4, although the Red Bull Holden driver was able to hold on.

The pair then spent the first stint separated by less than a second until van Gisbergen took his mandatory stop on lap 17.

Davison took over the lead, opting for the overcut strategy usually favoured by van Gisbergen and Triple Eight.

He didn't make his stop until lap 23, resuming behind van Gisbergen and just in front of an early-stopping Chaz Mostert.

After a brief challenge from Mostert, Davison was able to set about eating into van Gisbergen's 2.5-second lead with his superior rubber.

The Shell Ford driver wasn't quite quick enough, though, van Gisbergen managing the gap expertly as he took his second win of the day by four-tenths. Van Gisbergen now holds a 500-point series lead.

The early stop ultimately proved costly for Mostert who found himself under fire from Cam Waters as the second stint wore on.

Waters then took himself out of contention for the podium when he fired off the track at Dandenong Road while trying to get past Mostert.

That opened the door for Broc Feeney to hunt down Mostert, the rookie scoring a second career podium and first since Tasmania back in March.

Thomas Randle and David Reynolds were next as Waters recovered for 10th. 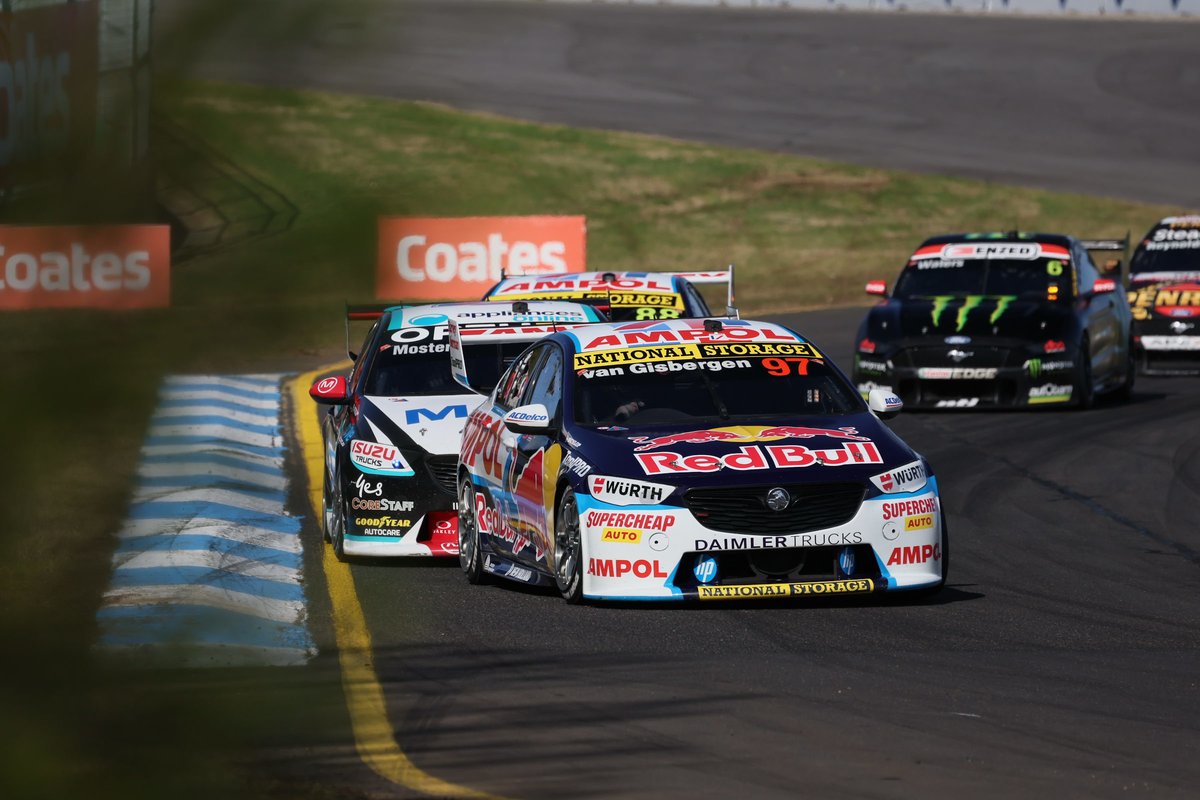 Shane van Gisbergen put Triple Eight back on top at Sandown earlier in the day with a dominant victory in the second Supercars race.

Van Gisbergen made a clean getaway from pole to lead the field into Turn 1, while those immediately behind him scrapped over second spot.

Cam Waters, who started second, found himself wide at the first corner after contact with old foe Chaz Mostert, which dropped him to fourth behind Broc Feeney.

Waters continued to lose spots in the laps that followed, the Tickford star dropping to seventh.

At the front van Gisbergen made light work of easing the lead over Mostert and Feeney to more than three seconds.

The second and third-placed drivers took their sole stop together on lap 14, Mostert continuing without drama.

Feeney, however, saw his race unravel when his car stalled when dropped from the jacks, the delay dumping him well back in the field.

Van Gisbergen went long in the first stop, not taking his stop until lap 21.

The Kiwi resumed with a 2.5s lead over Mostert which turned into a 7.5s advantage by the time he crossed the finish line.

The win means T8 has now won eight of the past nine races at Sandown, after a seven-race winning streak was broken by Will Davison yesterday.

Thanks to the dramas for Waters and Feeney, David Reynolds and Will Brown found themselves scraping over third place late in the race.

A slightly later stop gave Brown the better tyre quality when it mattered, the second-year driver able to sneak past his former Bathurst partner to grab the final spot on the podium.

Reynolds was fourth ahead of Scott Pye and Andre Heimgartner, while a stronger second stint saw Waters come home seventh.

Anton De Pasquale and James Golding were next as Feeney recovered from his pitstop drama to finish 10th.

Davison, who started 11th due to a battery fire in qualifying earlier today, looked to be on a charge with a decent first stint.

However his Dick Johnson Racing crew dropped him off his jacks with the wheel gun still attached during his stop, which gave him a drivethrough penalty, to leave him 15th at the finish.