Scott McLaughlin gave his Supercars title hopes a significant boost with a win and a second place in Darwin, while David Reynolds got his season back on track with a dominant victory on Sunday

A solid defensive effort was key to McLaughlin's Saturday win, the DJR Team Penske driver pitting on lap six in a successful bid to undercut early leader Reynolds, but then coming under pressure from other cars on fresher rubber in the closing laps.

It wasn't just Reynolds who had the better tyre quality late in the race either, with Shane van Gisbergen using a late stop superbly to bring himself into contention with around 10 laps to go.

However, despite van Gisbergen and Reynolds easily catching McLaughlin and having plenty of laps to find a way past, neither could get the job done.

A fine defensive drive gave McLaughlin a 0.4s win over van Gisbergen, Reynolds less than a second further back in third.

Reynolds was unstoppable in Sunday's 200-kilometre race, taking his second win of the season in comprehensive fashion.

For Reynolds it was all about the start, the Erebus driver storming off the line from the second row to sweep into the lead around the outside of the long first turn. 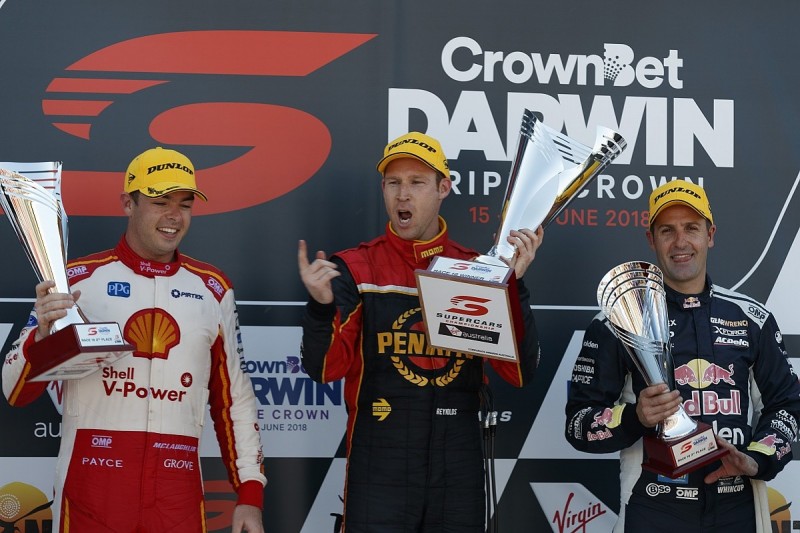 He then ran a simple even two-stop strategy, his lead as high as six seconds late in the race before a late safety car helped the pack close the margin down to under two seconds at the finish.

McLaughlin finished second, but was lucky to do so. His Penske Ford spent the second half of the race spewing oil onto its exhaust, leading to a lot of smoke and plenty of concerns over whether he'd make the finish.

He was also forced to deal with a dislodged helmet fan hose, making conditions difficult in the cockpit, as well as having Jamie Whincup glued to his rear wing for the entire final stint.

In the end McLaughlin held on to grab second by just over half a second, with Whincup third, and van Gisbergen fourth after using the overcut strategy for a second day running to make a couple of spots after the late safety car restart.

McLaughlin now leads the championship by 161 points over van Gisbergen, while Reynolds is back in third thanks to his Sunday win, but still 327 points - more than a round's worth - behind the leader.

With a seventh on Saturday before his third on Sunday, Whincup is still down in fifth in the points, with 433 to find if he's to defend his title.