Triple Eight Holden driver Whincup has won the last four straight crowns, plus the 2008 and '09 titles, in a dominant sequence interrupted only by James Courtney's 2010 success.

But the 32-year-old has endured a lean 2015 by his standards, struggling for pace for much of the season and going 16 races without a win between March and August.

Ironically the end of Whincup's title defence came on one of his strongest days of the season, as he took a win and a second place in the first two races of the Pukekohe triple-header.

That was not enough to keep him in the hunt as Prodrive Racing Australia's Mark Winterbottom bolstered his points lead with seventh and fourth places.

"I've had a good day," said Whincup, who is only eighth in the standings.

"Maybe I won't have as good a day when I realise that I'm going to have to hand that number one over to someone else, but I've had a fantastic four years representing it."

"I'll happily hand it over to the guy that deserves it the most."

Winterbottom's main rival is now Prodrive stablemate David Reynolds, whose narrow victory over Whincup in race two moved him to within 287 points with 750 available.

But the win for Reynolds (pictured below), who announced this week that he will replace Will Davison in the Erebus Mercedes team next season, only came after another blow for Triple Eight, as Craig Lowndes suffered a dramatic tyre failure on the pits straight.

Lowndes was unhurt in the 140mph incident, which sent his Holden spinning backwards into the wall.

His retirement from the race dropped him to third in the standings, 306 points behind Winterbottom.

For much of the year the title battle had been an intra-team Prodrive contest, before Winterbottom's team-mate Chaz Mostert was sidelined with leg injuries from his massive qualifying accident at the Bathurst 1000. 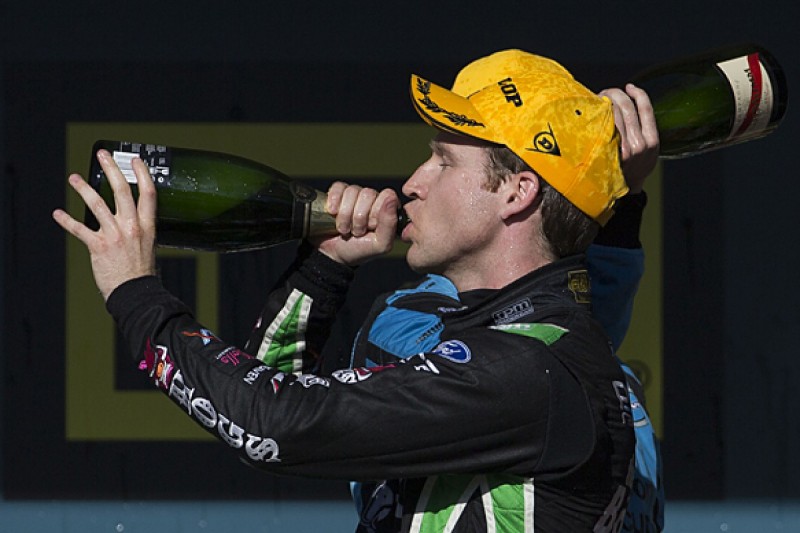