Scott McLaughlin beat his own Mount Panorama Supercars lap record with a rapid 2m03.772s on practice day for the Bathurst 1000

The runaway series leader came into the day as the only driver to have lapped the famous circuit under the 2m04s barrier, thanks to his famous qualifying shootout lap, a 2m03.831s, from 2017.

With the frontrunning primary drivers well into the mid-2m04s in Thursday morning's opening practice, qualifying simulations were expected to yield something special in the evening session.

And that's exactly what happened, McLaughlin doing the fastest ever Supercars lap around Mount Panorama with a 2m03.772s - despite only running two green tyres on the right side of his DJR Team Penske Ford.

"You're hanging on over the top now, it's unbelievable the grip of the cars and I think everyone is having a full dip," said McLaughlin.

"The second last corner, I dropped a wheel there. That was a moment and a half because I kept my foot into it. I'm an idiot, I've got to remember it's Thursday!

"There's a little bit here and there, the green side of the car felt alright, so the left-handers were pretty good, but the right-handers it's still a little bit loose.

"We'll tune it up overnight and throw a set of greens on it tomorrow and see, if it doesn't rain."

A total of four drivers have now broken the 2m04s mark thanks to that session, practice one pacesetter Jamie Whincup ending up 0.15s shy of McLaughlin with a 2m03.932s in his Triple Eight Holden.

The day's biggest incident was a heavy crash for Erebus Motorsport's David Reynolds/Luke Youlden Holden during the dedicated co-drivers' session.

Youlden ran wide at Sulman Park and fired into the wall. 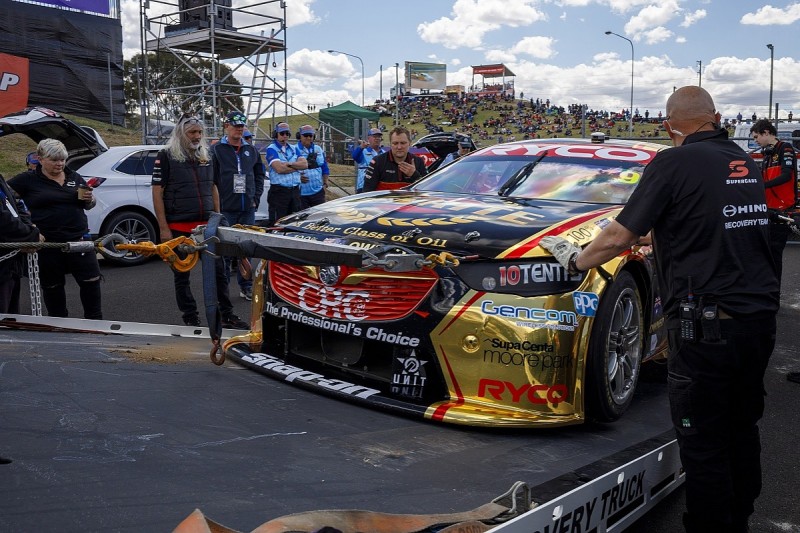 The impact recorded more than 20G, with Youlden requiring a trip to the medical centre for tests but escaping serious injury.

The team is now set for a long night working on the wrecked Commodore, with Friday's qualifying session, scheduled for 4pm, considered a realistic target for getting back on track.

"It's extensive damage but it's nothing we can't fix," said team boss Barry Ryan. "The target now is just to get out for qualifying."

Ryan added that no off-site assistance, such as a chassis rig, will be required during the repair.

"An oxy torch and a hammer and we'll be pretty good," he said. "Cutting tubes, replacing tubes, straightening rails, replacing lots of parts...

"The rear is the same. Roll bars, roll tubes at the rear as well, but it'll be alright.

"I think the worst parts are actually OK, the things that can put you out for the weekend are OK.

"But we're still assessing it. At the moment it looks like it'll be right. Twenty four hours, I reckon."

Ryan was not worried about the lost practice running, predicting the car will still be fast enough to be a frontrunner come qualifying.

"We know the car is fast, it doesn't matter who's driving it," he said.

"As long as Dave gets out and qualifies it on the front row and Luke has two half-hour sessions Saturday, we'll go racing, it's as simple as that."