McLaughlin and Chaz Mostert traded blows throughout the wet session, the Ford pair leading the way as times tumbled from the 2m33s to sub-2m30s.

With 10 minutes to go their battle went up a notch, McLaughlin pulling clear with a 2m28.187s.

He then looked to put provisional pole to bed with a 2m27.647s, only for Mostert to set two purple sectors as he looked to run down the DJR Team Penske Mustang.

But the Tickford driver fell short in the final sector, ending up four tenths of a second down on the runaway points leader.

The Friday session sets the field for the top 10 pole shootout on Saturday, and the grid from 11th back.

"I was so nervous before that qualifying session because we had such a good car and this is probably going to be the only wet session that we have," said McLaughlin.

"I'm really proud. We've been struggling with our wet car, but we had an awesome car from the start. That was hands down the best wet car I've ever had.

"I wanted to be at the end of the shootout when the track's a little bit colder and faster so I was pushing to get into those first five spots, but obviously Sunday's the one to worry about."

Mostert added: "The second set [of tyres] we put on didn't come in until very, very late. It is what it is. At least we're in the 10.

"Everyone in pitlane can give themselves a pat on the back. I had about 10 or a dozen moments out there were I thought 'that was close', no doubt everyone was feeling that."

Behind the top two it was a wild scramble for the shootout spots, Shane van Gisbergen grabbing third with his final run.

Will Davison was next, followed by Brad Jones Racing pair Tim Slade and Nick Percat. 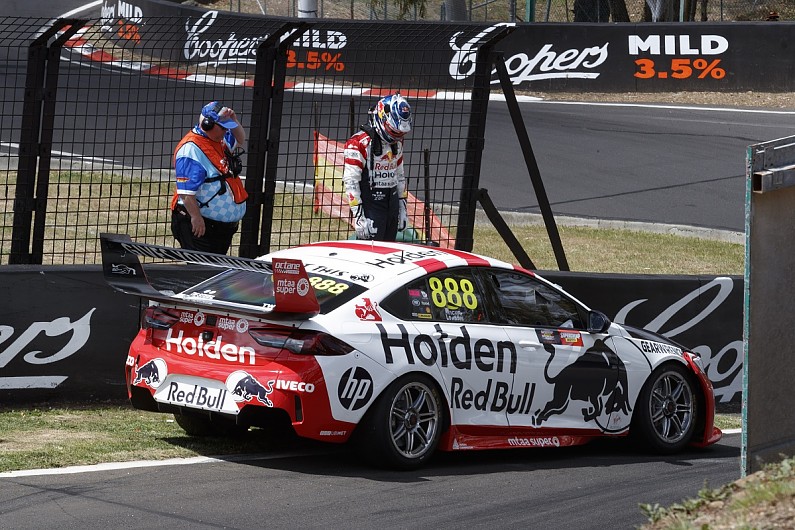 Jamie Whincup, who had crashed in the morning practice session (pictured above), spent the majority of the session outside the top 10, jumping from 16th to seventh right at the flag to ensure he will be in the pole hunt.

It was a similar story for Cam Waters, who didn't even get on track until there was just six minutes left thanks to an engine sensor issue.

He wasted little time getting down to speed, though, banking an against-the-odds shootout spot with eighth.

Mark Winterbottom was ninth, with Anton De Pasquale grabbing the final shootout spot - and the only one for Erebus - with 10th.

Rick Kelly will start the Bathurst 1000 from 11th, the Nissan driver getting bumped out of the shootout by De Pasquale's late lap.

Richie Stanaway, known for his wet weather ability, had looked to be on for a shock shootout berth, only to slip down to 12th in the closing stages.

Others to miss the single-lap dash include McLaughlin's team-mate Fabian Coulthard, who will start the race from 16th, as well as David Reynolds who was a lowly 22nd.