Running last in the single-lap dash, the Penske Ford driver showed his hand by going three tenths of a second clear of next-best Chaz Mostert in the opening sector.

But the end of the lap the margin was 0.4s, and McLaughlin's 2m03.378s is now the best ever in a Supercar around Mount Panorama.

It's the third time McLaughlin has reset the lap record this weekend, and the pole was his 15th for the 2019 season.

"Oh my god, bloody hell," he said after completing the history-making lap.

"I was hanging on for dear life there, Jesus Christ.

"Coming down the hill, I was pretty fast and thought 'jeez, I've just got to hold onto the thing'. Then just threw it into the Chase and the last corner and it held on, it stuck well.

"We've got one big one to get tomorrow, that's what I'm focused on a lot more, but we've qualified now and we're starting from the best possible position."

Waters was the big mover in the pole shootout, turning eighth in qualifying into third on the grid with a wild 2m03.917s.

"I gave that absolutely everything, didn't really leave much on the table," said Waters.

"The boys did a really good job with pressures, the fronts were up straight away. 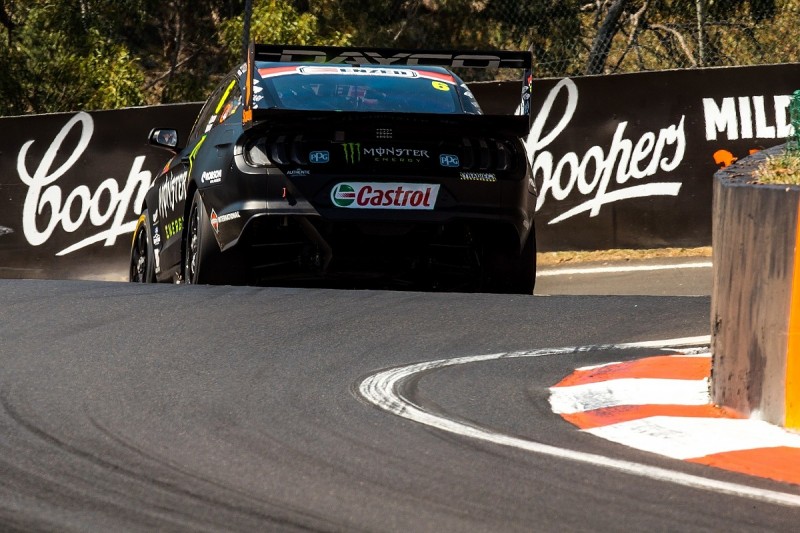 Will Davison dropped a couple of spots compared to qualifying with the sixth-best time, while Erebus' Anton De Pasquale jumped up three spots to grab seventh on the grid.

The two Brad Jones Racing cars both went backwards in the shootout, Nick Percat unhappy with his Holden's balance after dropping from sixth in qualifying to eighth.

"It's lacking front and rear grip, to be honest," said the 2011 Bathurst winner.

"The balance is alright, you can drive it to the walls and all that stuff, we just don't have the grip, so it's a bit frustrating."

Tim Slade, meanwhile, went from a fine fifth in qualifying to ninth after his single-lap effort.

"We haven't quite nailed the dry car this weekend yet, it's pretty good in the wet, but we'll keep chipping away," he said.

Mark Winterbottom will start the 2019 running of the 'Great Race' from 10th.