Shane van Gisbergen prevailed in a wild Supercars encounter on a drying track in Townsville that ended under the safety car due to a pitlane fire.

The Red Bull Holden driver outlasted Fabian Coulthard and Cam Waters to secure a second win of the season in what was the first ever wet race on the Townsville street circuit.

His victory came behind the safety car due to the late-race fire in the pitlane sparked by a fuel rig failure at Brad Jones Racing.

Points leader Scott McLaughlin was forced to recover to 12th after a first-lap clash with David Reynolds left the two frontrunners at the back of the field.

The race started in the trickiest of conditions, with the falling rain too light to necessitate a switch to wet tyres, but consistent enough to make life hard on slicks.

Surprisingly it was the category's two in-form drivers that fared worst at the start with McLaughlin and Reynolds clashing on the run to Turn 2 as the Penske driver tried to cover a fast-approaching Erebus Holden.

The clash meant both cars were in the pits by the end of the first lap with McLaughlin needing a fresh right-rear tyre and Reynolds requiring a new steering arm.

Out front polesitter Waters bolted in the wet conditions and pulled almost 10s clear of the field. But drying conditions started to suit second-placed Fabian Coulthard, who closed the gap to less than 2s, before jumping Waters when the pair pitted together on lap 18 of 64.

A lap later Jamie Whincup's race came to an abrupt end when he fired his Red Bull Holden into the Turn 6 wall with a rare unforced error. 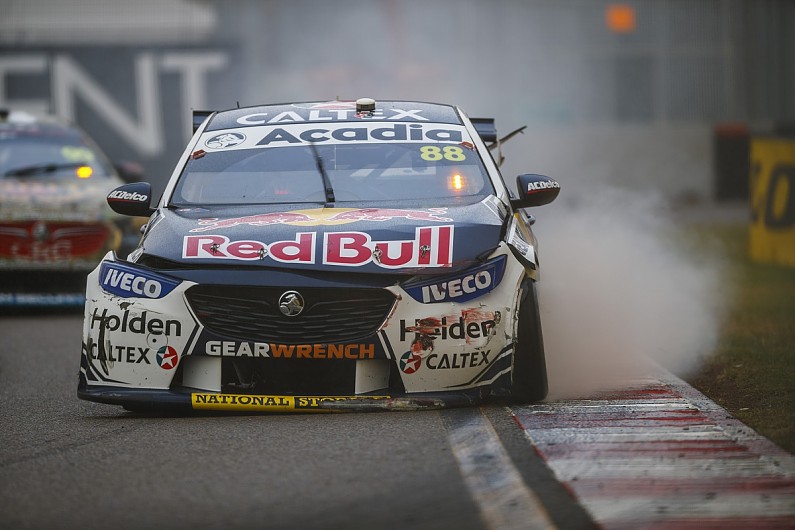 The resulting safety car forced the first round of stops to shake out with Coulthard leading Waters and the lapped McLaughlin between them.

Waters swiftly cleared McLaughlin on the restart, before passing Coulthard for the lead as conditions started to worsen approaching half-distance.

At the end of that lap most of the field, including the leaders, finally made the switch to wets.

That handed the lead to Anton De Pasquale, who had taken a gamble on grooved rubber during the safety car period.

As De Pasquale needed to stop again for fuel, the real fight was between Waters, van Gisbergen and Coulthard.

Initially Waters was the effective leader, but an excursion down the Turn 2 escape road allowed van Gisbergen and Coulthard through and made it a two-horse race.

As the 200-kilometre fight entered the late stages van Gisbergen started to pull away, giving himself a 2s buffer as they each battled with an out-of-sync Chaz Mostert.

The race's final twist started with nine laps to go when a safety car was called to retrieve Garry Jacobson's stranded Nissan, sparking a late round of stops for those still needing fuel.

That led to a spectacular fire in the pitlane when a BJR fuel rig failed while filling Nick Percat's Holden and the hot car ignited spilled fuel as it came of the jacks.

That meant two spectacular fires in pitlane, one at the bay itself and one out the back of Percat's car, which he stopped at pit exit.

The drama meant the race could not be started before the time certain finish cut-off, giving van Gisbergen a win ahead of Coulthard and Waters.

Through all the drama Garry Rogers Motorsport ended up with two cars in the top 10, James Golding with a career-best seventh and Michael Caruso in ninth.

McLaughlin continues to lead Coulthard in the standings, the gap between the two Penske drivers 292 points.