Fabian Coulthard claimed his second V8 Supercars victory of the day in the Australian Grand Prix-supporting non-championship event in Melbourne.

The Brad Jones Racing Holden driver, who had charged from fourth to win the morning's first race, again had his work cut out after losing the initiative to Craig Lowndes in the pitstops.

Coulthard had pulled out a comfortable lead after a good start from pole position in the early laps, but when he headed into the pits at the end of lap three, he re-emerged behind Lowndes.

The Triple 8 Holden driver had briefly run third on the opening lap before being passed by team-mate Jamie Whincup and Will Davison on the run to Turn 3.

But after a rapid pitstop - marred by contact with Jason Bright when the pair clashed as they left their pit boxes - Lowndes soon emerged as best-placed of the early-stoppers. Lowndes was given a one-place grid penalty for race three for the incident.

This gave him the effective race lead ahead of Coulthard, but the New Zealander was soon on his tail and eventually took the lead with a great move around the outside at Turn 3.

Coulthard reclaimed the lead on track when first Shane van Gisbergen pitted and then Tim Slade, who had yet to stop, pulled over with an apparent engine problem in his Erebus Mercedes E63 AMG.

After that, Coulthard never looked seriously threatened, with Lowndes settling for a comfortable second ahead of Bright, and Davison a solid fourth.

James Moffat gave the new Nissan Altima its best V8 Supercars result yet with a strong fifth place ahead of Scott McLaughlin, who put in an impressive charge after losing time at the start in a clash with Garth Tander. 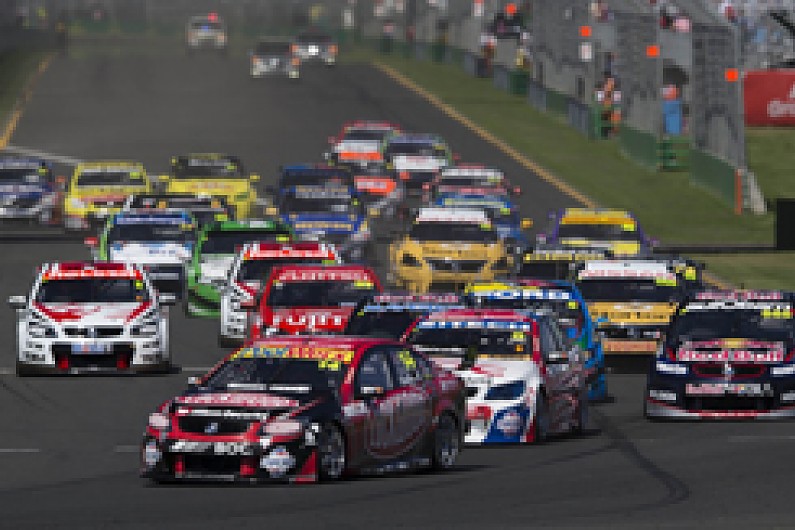 Todd Kelly completed a good day for Nissan with eighth place behind David Reynolds. Van Gisbergen was an impressive ninth despite starting 26th as a result of retiring from race one with a gearbox problem.

Champion Jamie Whincup endured a difficult race despite at one stage being on course for third behind team-mate Lowndes, having passed Bright after the pitstops.

He was given a drive-through penalty for a safety infringement in the pits when he was spotted spinning up his wheels before being dropped from his jack and, after dropping to the back, lost further time when he ran through the gravel at Turn 3. Whincup ultimately finished 25th and last.