Martin Truex Jr admits he 'probably took away Kevin Harvick's chance to win' at the Kentucky Speedway after a thrilling last-lap NASCAR Cup duel, in which Cole Custer won out

Truex fought from the rear of the field to lead 57 laps on Sunday at Kentucky but, after losing the lead after two late restarts and failing to protect the outside line at the white flag, he was forced to settle for second place.

Truex, Kevin Harvick and Ryan Blaney battled three-wide as the field raced towards the white flag but them, the No. 41 of Cole Custer came charging high and made it four-wide, taking victory for the first time in his NASCAR Cup career.

"I definitely didn't throw it away," said Truex as he reflected on the final restart.

"I didn't have the control of the restart on the last one.

"Really for me, it was most likely probably going to run second just because of the way the restarts are here.

"[On the last restart]I just worked on getting to the 4 car (Harvick), I got inside him and were side‑by‑side down the front-stretch.

"When you have control of the restart on the outside, it's definitely the best place to be.

"He was probably going to race if I didn't screw up, which I apologised to him for.

"He understands. It's the nature of these races. It's all momentum. You got to be in the right lane on the restarts." 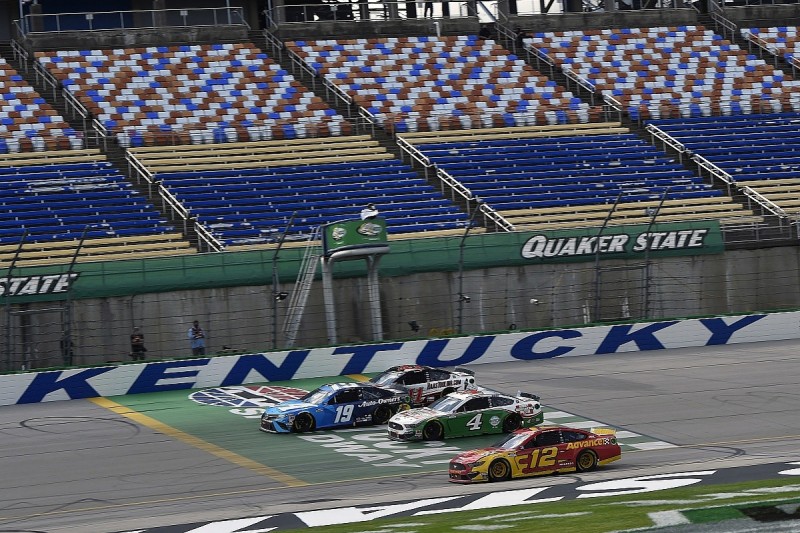 "I think I probably took away his chance to win the race. I just wanted him and (crew chief Rodney Childers) and his guys to know, 'hey, it's on me, my bad'.

"I can't go back and change it now, but definitely was sorry that I did it.

Truex felt it was important to go and and speak with Harvick after the race, wanting to make sure he understood that contact between the two, which knocked Harvick from the preferred outside line, was accidental.

Truex says he was simply trying to get into the high lane before he got "freight-trained" by Blaney and others.

"I think it's always important to get it out of the way quickly," Truex explained.

"I know Kevin well. We've raced together a long time; I have a tremendous amount of respect for him.

"Like I said, typically we don't have any issues. I just misjudged getting in behind him. I felt bad about that.

As for Custer's run, Truex was just about as surprised as those watching when the rookie driver showed up to his outside.

"I didn't hear him, expect him to come. I don't know that my spotter seen it coming.

"By the time he told me, he was already next to me. There was no way I could even try to block.

"At the same time I think he had so much momentum, I don't know that I could have blocked him anyway without crashing us both."