The exhibition race is where those who scored a win in the previous year of Cup racing, are a past All-Star winner or a series champion compete in an event that is not part of the regular 36-round Cup season, but is one of the more anticipated races of the year.

Normally run on the final Sunday in May - Memorial Day - the race was not held at Charlotte Motor Speedway for the first time since 1986, moving to the 0.5-mile short track at Bristol, owing to a calendar rejig enforced by the coronavirus pandemic.

Blaney missed the pit-entry at the end of stage 2, meaning he restarted the third segment on 35 lap older tyres than Elliott, although this was not a big handicap for the Ford Mustang driver as he would ultimately complete the race on this same set of Goodyear tyres.

Despite Busch's best efforts, he was unable to catch a relatively untroubled Elliott who took his maiden All-Star win, the ninth overall for Hendrick and the squad's first since Jimmie Johnson's fourth triumph in 2013.

Elliott is also the first driver since father Bill to win the All-Star at a circuit other than Charlotte, with the Elliotts also becoming the first father/son combination since Dale Earnhardt Jr matched his father's three wins with his sole victory in 2000.

Kevin Harvick and Brad Keselowski both pitted at the end of the third stage, hoping fresher rubber may pay off in the final sprint to the flag, but the Stewart-Haas Racing and Penske Ford drivers could only make their way to third and fourth respectively, with Denny Hamlin in close attendance behind for JGR. 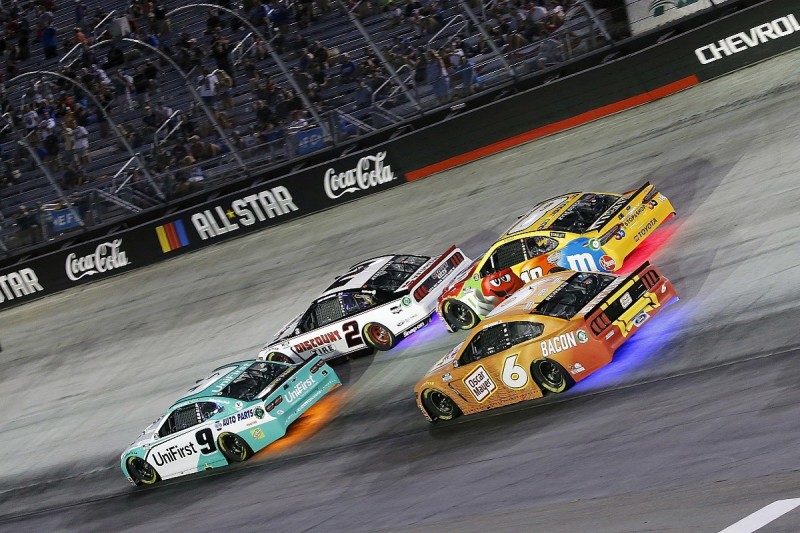 Blaney fell to sixth by the flag, although he did comfortably see off fellow Penske driver Joey Logano, with Alex Bowman (Hendrick) and Aric Almirola (SHR) crossing the line within half a second of Logano's #22.

Almirola had only qualified for the main event after winning stage one of the Open Race a short while before.

William Byron took stage two in that event, which was won by Matt DiBenedetto. The duo came across the line together in 12th and 13th, as recipient of the fan vote, Clint Bowyer could only manage 15th.

Martin Truex Jr had been due to start from pole position after the grid had been randomly drawn, but his JGR Camry was sent to the back of the pack for failing pre-race inspection twice, salvaging a 10th place finish.

Competing in his final All-Star race before his planned retirement, Johnson, who has a record four wins in the event, had an anonymous race, in his second event back since his positive test for COVID-19.

Ryan Newman (2002 winner) and Kurt Busch (victorious in 2010) both spun during the race and came home at the back of the field.