Team Penske driver Ryan Blaney made it a seventh straight victory for Ford at Michigan International Speedway, taking his second NASCAR Cup victory of the year over William Byron.

Hendrick Motorsport Chevrolet racer Byron led the way on a restart with eight of 200 laps remaining and Blaney was the first car to pick the inside lane on the restart.

When the race went green, Kyle Busch's Joe Gibbs Racing Toyota gave Blaney a huge push that helped to shoot him past Byron and into a big lead entering Turn 1.

Blaney then deftly held off repeated charges from Byron and polesitter Kyle Larson (Hendrick) on the final two laps to claim victory by just 0.077 seconds, the closest finish at the track since the advent of electronic scoring in NASCAR.

It marks the first time that Blaney, a full-time Cup Series driver since 2016, has scored more than one race win in a season.

“We got a great push from (Busch) on the restart and were able to get clear there,” Blaney said.

“Michigan, it’s a matter of running pretty much wide-open and playing the air game. I hate that we have to race that way but I got the run and it worked out for us.

“We weren’t great to start the day off but we kept working and working and got a lot better.

“It really was push on the restart – that was the whole thing. I really appreciate Kyle for pushing me through there.” 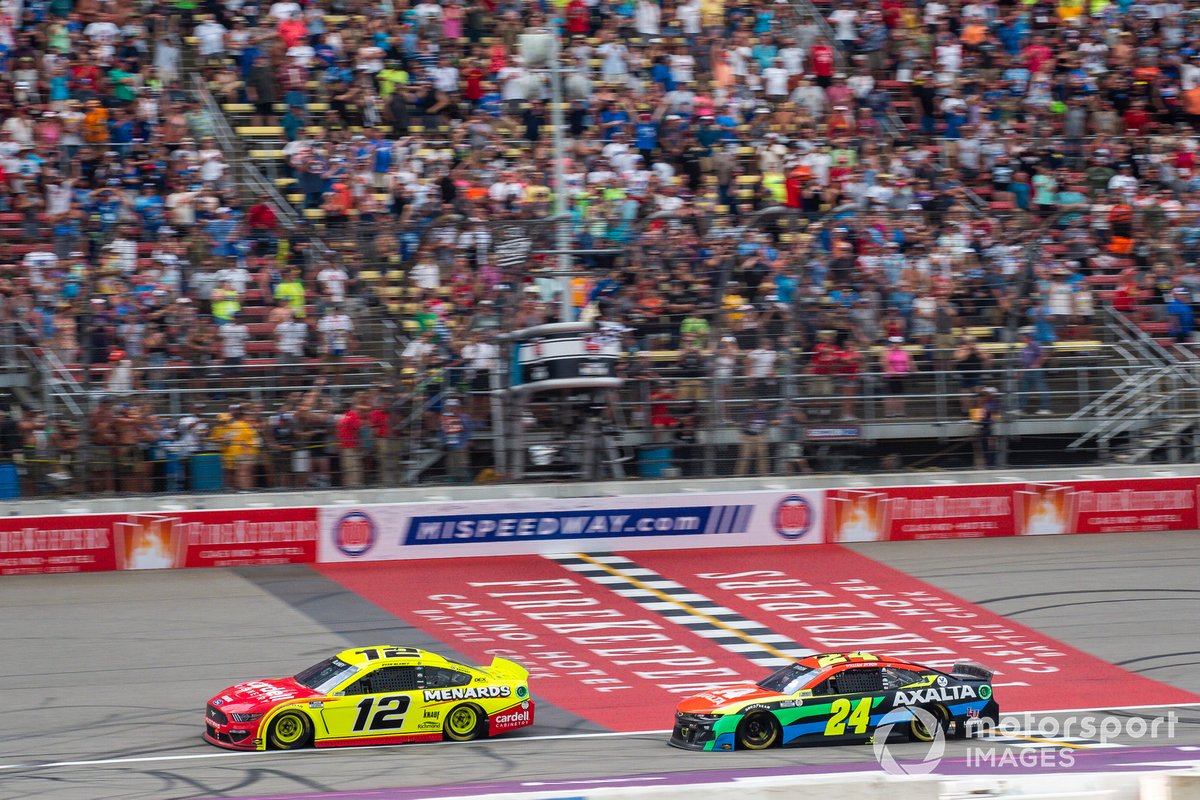 Busch, who easily grabbed the stage two win thanks to a two-tyre green-flag pit stop, would slip to seventh at the finish as Larson took third ahead of Kurt Busch (Chip Ganassi Chevrolet) and Denny Hamlin (JGR Toyota).

Larson, who had finished second to Chase Elliott in the first stage, led the way when the final stage of the race returned to green on lap 127.

NASCAR displayed a caution on lap 180 with Byron leading from Larson, Hamlin, Kurt Busch and Blaney as a light rain began falling on the track in Turn 1.

Several cars elected to pit but Byron remained on the track and in the lead when the race returned to green on lap 187.

A multi-car accident resulting from contact between Tyler Reddick and Joey Logano in Turns 3 and 4, also collecting Christopher Bell, Truex, Ryan Newman and Michael McDowell, then brought out another caution.

The race returned to green with eight laps to go and Byron still in the lead, followed by Hamlin and Larson. Kyle Busch gave Blaney a huge shove on the restart to send him into the lead.

Keselowski was involved in one of the race's other dramatic incidents at the finish of stage two, when he hooked Austin Dillon hard into the wall crossing the line.

Kevin Harvick’s 14th-place finish was good enough to lock him into the 16-driver playoff field. One spot in the field will be open entering next weekend’s regular season finale at Daytona International Speedway.