Matt Kenseth took his first NASCAR Cup victory of the year at Phoenix, as Brad Keselowski claimed the last spot in the 2017 playoff final four

It was in the pits that Kenseth threw himself into contention for the win, having emerged from the pitlane first following a caution for Trevor Bayne's accident in the middle of the final stage.

Joe Gibbs Toyota driver Kenseth lost the lead to Chase Elliott with 29 laps to go, with Elliott desperate to get the win he needed to secure the final playoff berth.

But Kenseth, who does not have a drive for next year, repassed Elliott in the final 10 laps to secure his 39th Cup career win. 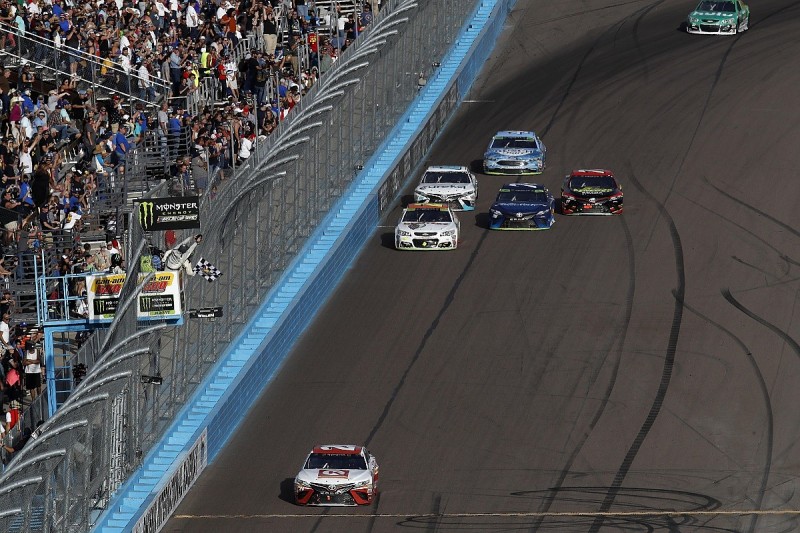 Elliott had to settle for second, missing out on the fight for the title despite a battling drive throughout the day that included a brush with Denny Hamlin two weeks on from their collision at Martinsville in which Elliott was punted out of the lead.

Hamlin - who had won stage two having largely dominated the first half of the race - suffered a cut tyre from the scrape, which forced him into the wall a lap later and ended his chances of making the final title battle.

As a result of Hamlin's retirement, Keselowski made the cut for the final four on points despite a very quiet race. Keselowski will join Martin Truex Jr, Kyle Busch and Kevin Harvick in fighting for the title at the Homestead season finale.

Truex finished third, crossing the line just a tenth of a second behind Elliott, with Furniture Row Racing team-mate Erik Jones fractionally behind in fourth.

Kyle Larson had won the first stage, snatching the lead with five laps to spare before the race went to caution.

Larson then pitted part-way through the second stage with a suspected engine issue, subsequently resulting in his fourth retirement in a row.

Keselowski only finished 16th ahead of polesitter Ryan Blaney, who fell back in the early stages of the race and failed to recover with an ill-handling Ford.

Jimmie Johnson's hopes of retaining the NASCAR Cup title ended after suffering a blown tyre, which put the seven-time champion into the wall moments before the end of the second stage.

The race was briefly red-flagged with 58 laps to go due a bizarre incident. Chris Buescher hit the wall with brake failure and the barrier subsequently caught fire, forcing a brief stoppage for repairs.