Alex Bowman put the #48 Hendrick Motorsports car back in familiar surroundings with victory at Dover to pick up his second win of the 2021 NASCAR Cup season.

Seven-time NASCAR Cup champion Jimmie Johnson won 11 times at Dover International Speedway in the #48 car, and having handed the car over to Bowman when he stepped away from NASCAR racing at the end of the 2020 season Bowman put on a fitting tribute.

Bowman, who grabbed control of the race during a round of pitstops on lap 304 of 400, never relinquished it thereafter in a controlled performance capped by holding off team-mate Kyle Larson by 2.017 seconds at the chequered flag to take victory.

The win is Bowman’s second of the season and fourth of his career, while it also marks the first season in his Cup career to produce multiple wins.

With Larson having to settle for the runner-up spot for a second consecutive race having finished behind Martin Truex Jr at Darlington, he could still take pride in helping Hendrick Motorsports complete a 1-2-3-4 finish.

Hendricks Motorsports team-mates Chase Elliott and William Byron finished third and fourth respectively, to mark the first time the team had locked out the top four spots in its existence. Such was the dominance of the Hendrick Motorsports squad, the quartet led 382 of the 400 laps at Dover.

Bowman’s win also marked his team’s 267th victory in the NASCAR Cup, and now trails Petty Enterprises by just one win for the most team triumphs in NASCAR history. 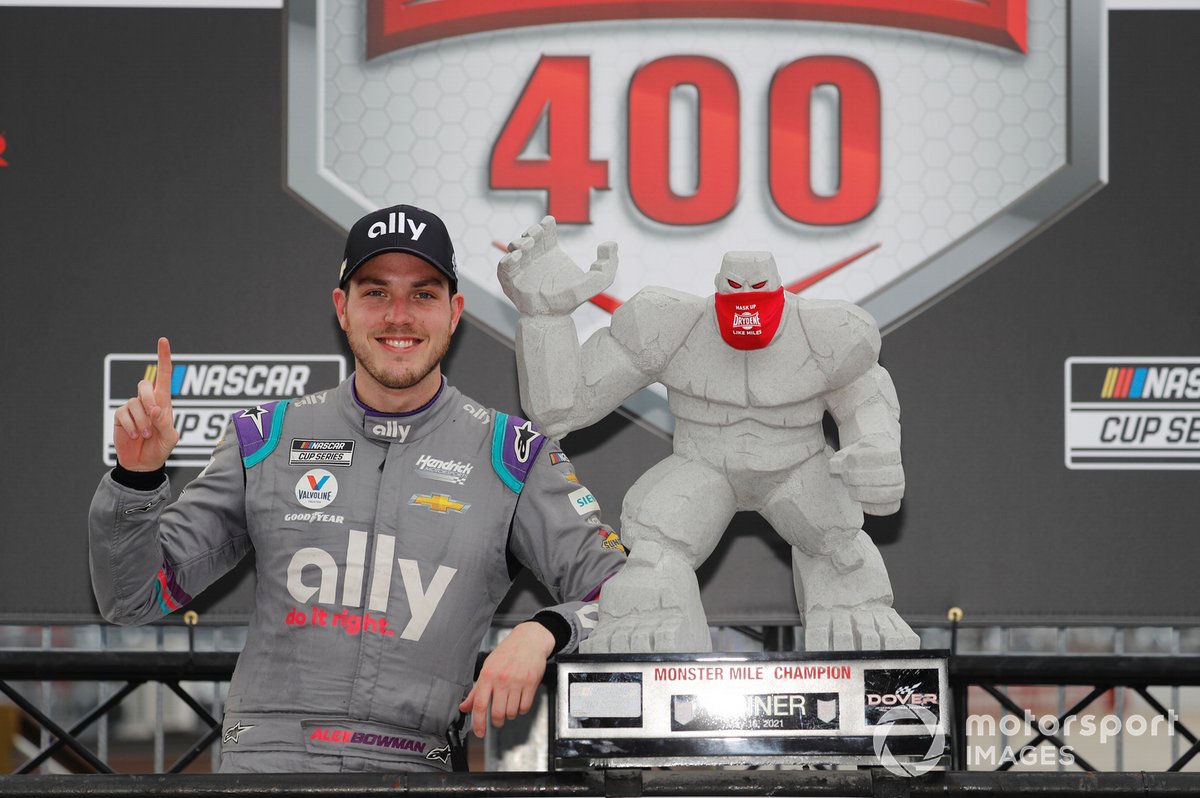 Team Penske’s Joey Logano acted as the nearest challenger to the Hendrick Motorsports top four, coming a distant fifth but ahead of Stewart-Haas Racing’s Kevin Harvick.

Denny Hamlin, the only driver to finish inside the top 15 and to have led laps in the race outside of the Hendrick Motorsports top four, claimed seventh place for Joe Gibbs Racing as Tyler Reddick (Richard Childress), Daniel Suarez (Trackhouse Racing) and Cole Custer (Stewart-Haas Racing) rounded out the top 10.

Aric Almirola’s race ended prematurely when he appeared to suffer a front-right tyre deflation and hit the Turn 3 wall which sparked a fire around the wheel as the Stewart-Haas Racing driver came to a halt.

The 37-year-old was able to walk to an ambulance before being taken to the medical centre where he was later evaluated and released.

Last week’s winner at Darlington Truex Jr, who started on pole and led the first 15 laps until William Byron powered around him to grab the lead, needed an extended pitstop during Stage 2 as his Joe Gibbs Racing team underwent engine investigations. The 40-year-old returned to the action but dropped a lap down to finish in 19th place.