Winning the opening two stages and controlling the majority of the final stage, Chip Ganassi Racing's Larson led 284 of 367 laps.

Despite his lead surviving two restarts in the closing stages, a spin for Jeffrey Earnhardt on lap 344 triggered one final caution and one final pit window.

A quick pitstop allowed Keselowski to jump Larson in the pitlane. The Penske driver was able to control the lead at the restart to seize victory and book an automatic place in the playoffs.

Keselowski had finished stage one in fifth place and ended stage two in second. His Cup series victory follows a win in Saturday's Xfinity race at Darlington.

Larson struggled after being demoted by Keselowski ahead of the final restart. He slipped behind Keselowski's team-mate Joey Logano and was forced to hold off Stewart-Haas Racing's Kevin Harvick in the final laps.

Behind the Penske one-two, Larson managed to beat Harvick by 0.297s across the line to seal third place in a rare race that was not dominated by NASCAR's 'Big Three'.

Harvick had started the race in 22nd, climbing into sixth place by the end of stage one.

In stage two, Harvick battled Martin Truex Jr and Larson for the race lead at mid-distance, before his tyres faded at the end of the segment after SHR attempted to make one fewer pitstop compared to the majority of the field. 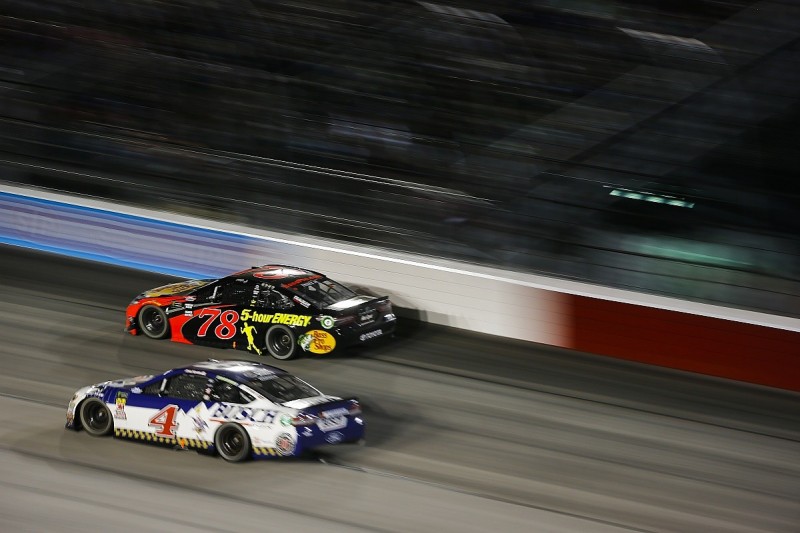 Truex's challenge faltered towards the end of stage two. During his final pitstop in the segment, an uncontrolled tyre meant that he was handed a drivethrough penalty, which dropped him one lap down.

He was unable to recover the lap in the free pass position, as Larson managed to lap Austin Dillon in a drag race to the line at the end of the stage.

Truex ended up finishing in 11th after he was unable to recover to the lead lap later on.

Chase Elliott managed to pass Erik Jones after the final restart to grab fifth place after he had figured in the top 10 through the race.

While Joe Gibbs Racing's Jones had been Larson's closest challenger in the opening stage, he dropped down the order after suffering an uncontrolled tyre penalty ahead of stage two. Despite working his way back into contention, he struggled at the final restart and ended up eighth.

He was demoted late on by the Busch brothers, with SHR's Kurt finishing ahead of JGR's Kyle, in sixth and seventh respectively.

Jamie McMurray finished the race in ninth place. His practice mileage was compromised by an engine blowout and he started from the back of the field after the team used qualifying as an additional opportunity to test.

Clint Bowyer and Ryan Newman were both in contention for a top 10 finish before the two collided in the latter stages.

Newman slowed down in order the enter the pits and Bowyer was unsighted, slamming into the rear of the #31. Both drivers were uninjured.

Darlington is considered NASCAR's 'throwback' weekend with the majority of the field running retro liveries honouring historic drivers, teams and moments in the series' history.