Harvick ran near the front for most of the race but led the least number of laps. He became a key player in the race for the win on lap 257 of 301 when, following a caution brought out by team mate Clint Bowyer hitting the wall, he emerged from the pits behind Busch.

This pair had been behind Aric Almirola prior to the stoppage, but a slow pit stop for the Ford driver dropped him back. Almirola managed to hold on during the final 40 laps for third place, but the closing moments were all about Busch and Harvick.

Harvick had the quicker car but couldn't find a way past the Toyota driver until lapped traffic began to hamper Busch's progress.

By lap 284 Harvick was right on Busch's tail, and made contact with him at turn two five laps later. The move was repeated on the next two laps before Harvick forcefully moved Busch aside with just seven laps remaining.

The heavy-handed pass didn't take Busch out of contention completely, but allowed Harvick to build an unassailable lead in the race's closing stages.

Busch held on for second, ahead of Almirola and Martin Truex Jr. who won the first stage of the race and led the second-most laps overall. 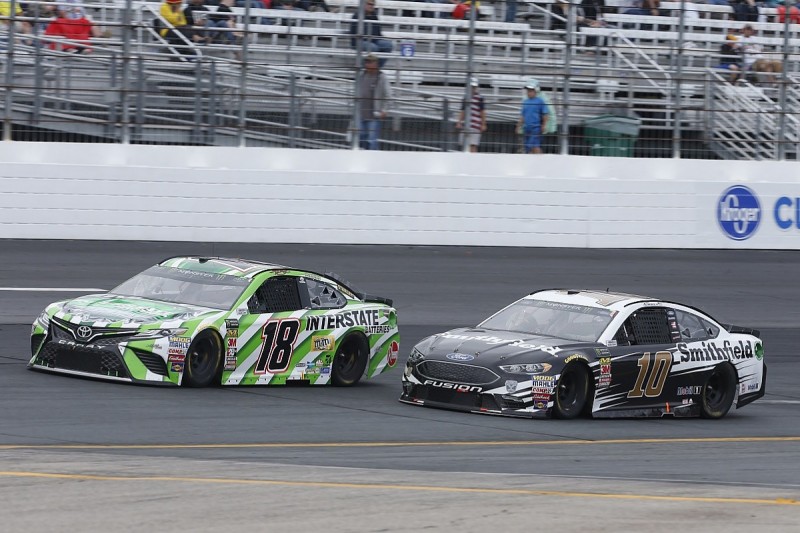 The reigning series champion looked almost unbeatable in the early part of the race but was unable to take a second consecutive win after slipping down the order in the third and final stage.

Chase Elliott won the second stage of the race and finished fifth. His stage win was his first of the year and just Chevrolet's third all season. It was also the first time the Hendrick Motorsport's driver had made a pass for the lead since the race at Phoenix last November.

Kurt Bush led the most laps during the race, completing 94 of the race's 301 tours at the front of the field, but a poor restart after the final caution dropped him down the order.

Joey Logano and Jimmie Johnson completed the top 10, Johnson's result being just his seventh top 10 finish all season in what has been a tough year for the seven-time series champion.

Bad weather threatened to postpone the race, with forecast showers leading organisers to bring the race forward an hour, before inclement weather delayed the start by approximately three hours from the amended start time.

Rain threatened again in the closing stages, but the race went the distance untroubled.