Starting his first full Cup season with Richard Petty Motorsports, Wallace got himself into contention in the third stage, joining the leading pack of 10 cars drafting single-file after recovering from an early brush with the wall that dropped him down the order.

When Penske's Ryan Blaney made contact with Stewart-Haas Racing's Kurt Busch and triggered a multi-car crash, Wallace was elevated into the top four.

He then took advantage of Austin Dillon and Aric Almirola's race-deciding collision on the last lap to move into the top three, running side-by-side to the finish with Denny Hamlin and beating the 2016 Daytona 500 winner to second.

Former RPM driver Almirola had said that Wallace could not afford to "screw up" with NASCAR legend Richard Petty as his boss, and Wallace admitted Daytona had taken its toll on him.

"I actually had the same piece of gum in for I think the last 10 laps. And it wasn't great," he said.

"When we were single-file with like six [laps] to go, I'm singing to myself. And I think that's what really changed it for me is how calm I was for my first Daytona 500." 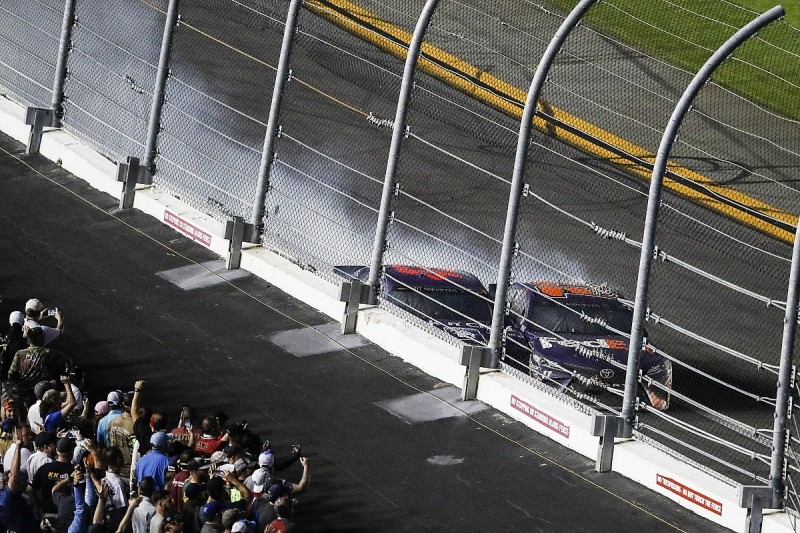 Hamlin and Wallace made contact after the flag, which Hamlin said was because Wallace left him with a cut tyre in their final-corner battle.

Wallace brushed off any criticism by saying Hamlin had pulled similar moves last year, adding: "We had some momentum and we beat him".

But he admitted he had had a scare when he first saw Petty after the race.

"The King [Petty] comes in all mad at me and says 'after all I told you, what was the first rule I told you to do.'

"Thank you to the King for keeping me young, keeping him young as well."

RPM had switched to Chevrolet for 2018 and signed Wallace to replace the outgoing Almirola.

"We know how much stress this team has been through in the last three or four months just trying to get this programme together," said Wallace.