Brad Keselowski has admitted it feels like his Penske team is 'stealing' NASCAR Cup race wins from faster rivals, after completing a hat-trick at Las Vegas

Penske's Keselowski, Joey Logano and Ryan Blaney were outpaced by dominant trio Kevin Harvick, Martin Truex Jr and Kyle Busch for much of the 'regular season'.

But Keselowski won the last two races before the playoffs at Darlington and Indianapolis, then triumphed in the championship shootout opener at Vegas too.

On all three occasions, Keselowski led relatively few laps but forced himself into contention through sharp strategy and aggressive restarts.

That prompted champion Truex to suggest the Penske driver was getting lucky - a description Keselowski readily accepted.

"He's spot on," said Keselowski. "We have not been the best car the last three weeks.

"This week we were probably a top three or four car. The #78 [Truex] was clearly the best car, and we put everything together when it counted and kind of stole it. Same scenario the last two weeks.

"I thought the #42 [Kyle Larson] was the best car in Darlington, and we hit the strategy right and executed the last pitstop and that put us in position to win. 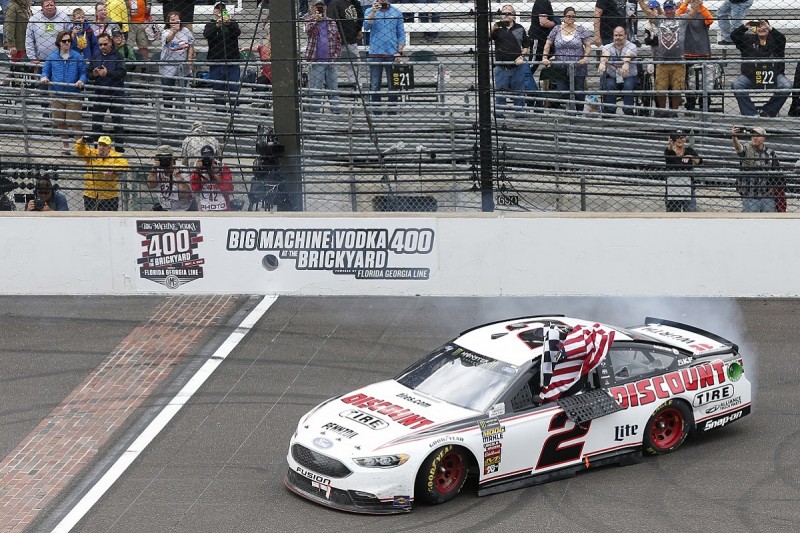 "And in Indy [pictured] we were nowhere near probably even a top-10 car.

"We were probably a 15th-place car, and [crew chief] Paul Wolfe hit the strategy right and I hit the restart right to make all the passes when it counted and won that race.

"With that in mind, I feel like we stole the last three races.

"We're not complaining, but we still have a lot of work to do to go out there and win heads up without those issues."

Truex joked that "Brad clearly found a horseshoe", and said Keselowski's results showed criticism of the current NASCAR season for being predictable was unfair.

"Three races in a row he's won and he has not had the best car," said Truex.

"If you want to really talk about the sport being what it is, you've got to look at that.

"Obviously he hasn't led the most laps in any of those races, and he showed up at the end with good pitstops and good short-run speed.

"Clearly it's pretty obvious how it worked out. He's hot right now. He's on a streak.

"We finished third [at Vegas] with the best car. The previous three weeks we had a top three car and we finished 14th or worse in every one of them.

"It's a tough sport. A lot of things can happen, and momentum and luck being on your side, there's a lot to say for it.

"Obviously they're executing, they're doing all the little things right, and that's what it takes to win these things."