Cole Custer claimed his maiden NASCAR Cup victory in a last-lap dash to the flag at the Kentucky Speedway, winning out in a four-wide battle for the lead.

Custer just managed to edge out the more experienced drivers and had a car-length's gap to Truex as he took the chequered flag.

The victory makes Custer this season's ninth different winner and the first rookie to visit Victory Road this season.

Custer had spent most of the race towards the front of the field, but it was only within the final laps that he came to challenge for the lead.

Truex led much of the second half of the race, despite having started from the back of the grid after failing the pre-race inspection.

The Joe Gibbs Racing driver made quick work of climbing back into the top 10, and at the start of the second stage he brought the fight to Brad Keselowski for the race lead, quickly dispatching the Penske driver and building a gap of almost three seconds before the final scheduled pit stop window opened.

Up until that point the race had been relatively clean, with only one caution due to a spin from Matt Kenseth early in the race.

That changed during the final pit stop window, and just after Truex and Blaney exited the pits, a caution was thrown when Brendon Poole suffered tyre damage and left debris across the track.

This was the start of a slew of pit stops in the final 50 laps of the race. 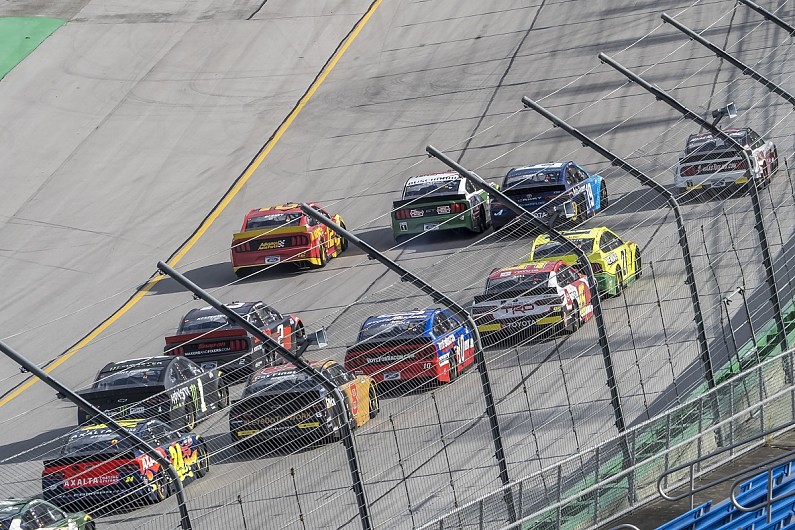 On each restart, Truex and Blaney were alone in the battle for the lead, swapping positions before an accident further down the order paused racing again.

Then, on the penultimate restart, Harvick shot past the duo to take the race lead, only for another spin from Kenseth to bring out the yellow flags again with seven laps remaining.

Truex couldn't hold off Custer on the restart, but stayed ahead of Harvick to take second.

The four-wide battle put Harvick and Blaney at a disadvantage, with Harvick's car surrounded by plumes of smoke from tyre rub, helping Matt DiBenedetto to snatch third.

Harvick finished fourth, ahead of Kurt Busch and Blaney, who had spent the entire race needing to hold the car in gear through turns one and two thanks to a broken shifter.

Jimmie Johnson put in a strong performance after missing the Indianapolis race due to COVID-19; starting the race 20th, he had already made up five places in the opening six laps.

Despite a vibration issue, he was able to join the fight at the front in the second half of the race.

However, that came undone just 18 laps before the chequered flag while running third as racing resumed after a caution brought out by John Hunter Nemechek.

As Keselowski was lining up a push behind him, Johnson tried to hold the inside line but spun, dropping down the order and bringing out the penultimate caution period.

He was able to continue, but finished P18.

Keselowski took ninth, behind Christopher Bell and early race leader Aric Almirola, whose streak of top five finishes came to an end with eighth, as Tyler Reddick completed the top 10.