Kyle Larson has issued an apology after being suspended indefinitely by NASCAR for the use of a racial slur during a live-streamed virtual racing event on Sunday night.

Chip Ganassi Racing driver Larson was competing in an iRacing event at Monza when he appeared to lose communication on his headset with his spotter.

The 27-year-old, a six-time winner in the Cup series, was broadcasting his participation on his Twitch live stream when he made the comment, which was quickly picked up by his followers and circulated on social media.

In response, NASCAR has suspended Larson, a graduate of NASCAR's Drive for Diversity programme, moving him to issue a video apologising on social media, while Chevrolet has ended its association with him.

In a statement, Chevrolet said: "Chevrolet has suspended its relationship with Kyle Larson indefinitely, as we do not tolerate this behaviour.

"We will continue to monitor the events surrounding Mr. Larson & are prepared to take additional action."

"Last night I made a mistake and said the word that should never, ever be said and there's no excuse for that.

"I wasn't raised that way. It's just an awful thing to say.

"I feel very sorry for my family, my friends, my partners, the NASCAR community and especially the African-American community.

"I know the damage is probably unrepairable and I own up to that.

"I just wanted to let you all know how sorry I am and I hope everybody is staying safe during these crazy times." 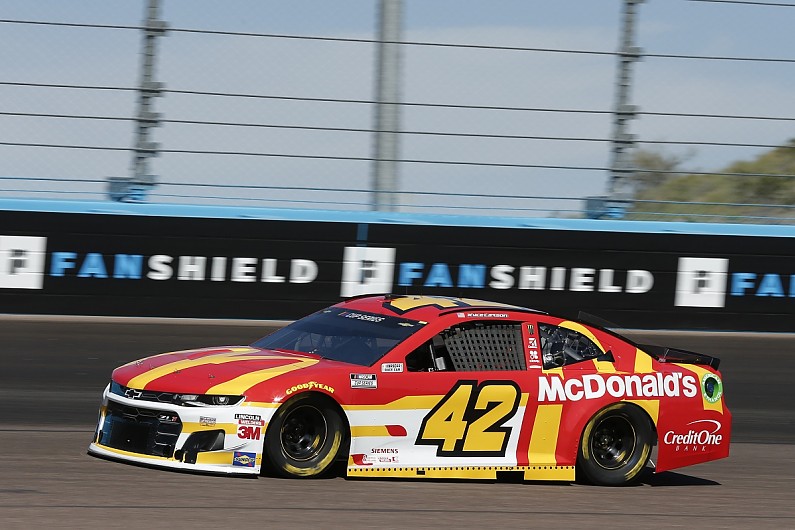 NASCAR cited Section 12.8.1.e in its Rule Book which states that any "public statement and/or communication that criticises, ridicules, or otherwise disparages another person based upon that person's race, color, creed, national origin, gender, sexual orientation, marital status, religion, age, or handicapping condition" could result in a fine and/or indefinite suspension, or termination.

In a statement, it said: "NASCAR has made diversity and inclusion a priority and will not tolerate the type of language used by Kyle Larson during Sunday's iRacing event. Our Member Conduct Guidelines are clear in this regard, and we will enforce these guidelines to maintain an inclusive environment for our entire industry and fan base."

It said Larson will also be required to attend 'sensitivity training'.

CGR had earlier issued a statement of its own, which read: "We are extremely disappointed by what Kyle said last night during an iRacing Event.

"The words that he chose to use are offensive and unacceptable.

"As of this moment we are suspending Kyle without pay while we work through this situation with all appropriate parties."