Joey Logano went from last to victory in the NASCAR Cup race at Richmond, leading home Brad Keselowski to claim a Penske one-two.

Having originally qualified fifth for his 300th Cup start, Logano was sent to the back of the 38-car starting grid due to a transmission change.

He was one of several drivers to stop at the first early caution and made steady progress up the order to sneak into the top 10 at the end of stage one.

With a strong car underneath him, Logano continued to move up the field and found himself in the top five at the pitstop phase under the seventh caution, caused by Dale Earnhardt Jr spinning with a punctured left-rear tyre.

Penske gambled at the penultimate caution to keep both Logano and Keselowski, who was leading at the time, out on track.

Logano got the jump on his team-mate to take the lead with just under 30 laps remaining.

He then got once last chance to pit at the final caution, caused by Ryan Blaney hitting the wall with a flat left-rear tyre, but had to battle his way through slower cars that gambled on staying out.

Logano put his fresh tyres to good use, quickly moving up to second place and then taking the lead from Kyle Larson. He went on to claim his 18th Cup victory and first of the 2017 season. 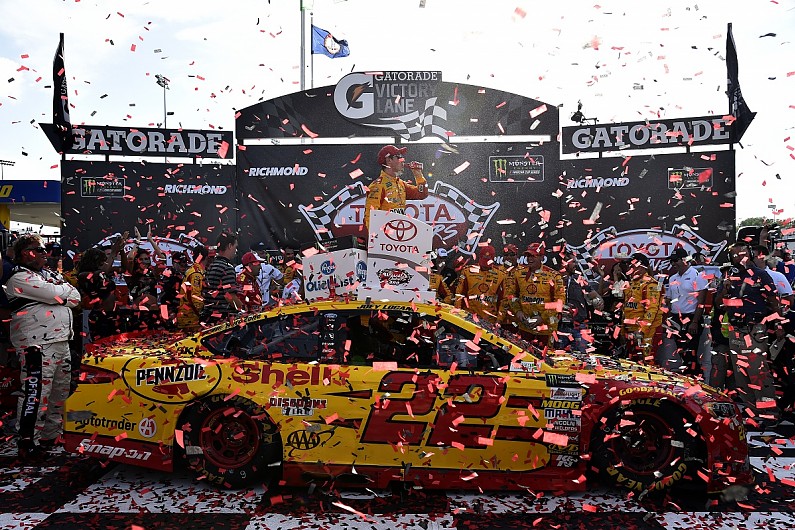 Keselowski also battled his way back up the field in the closing stages, with the two Penske Fords pulling clear of the rest.

He had won stage two and led 124 laps but missed out on victory by just eight tenths of a second.

Denny Hamlin featured at the front for the majority of the race, finishing third despite an early scare with an electrical issue. He completed the top three for Joe Gibbs Racing.

Ricky Stenhouse Jr hit the wall at Turn 3 mid-way through the opening stage but recovered ground. He risked it staying out in the final caution and despite losing a few spots, he finished fourth.

Kevin Harvick was another driver to feature near the front, but he eventually finished fifth, ahead of Jamie McMurray and Ryan Newman, who made up ground staying out in the green-flag stops midway through the final stage.

Kurt Busch was eighth, with Aric Almirola and Martin Truex Jr moving into the top 10 in the final laps.

Kyle Busch looked to be challenging for victory after bouncing back from an early pitlane penalty, only to get another at the last stops. He fell to 16th.

Stage one winner and polesitter Matt Kenseth led the most laps with 164 but a late right-rear puncture after contact with Chase Elliott dropped him to 23rd.